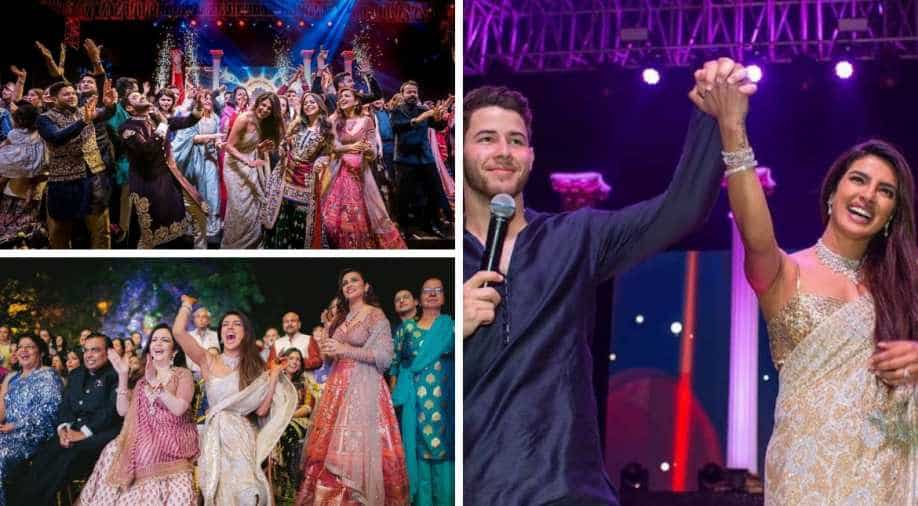 Priyanka and Nick tied the knot in a Hindu ceremony yesterday night at Umaid Bhawan Palace in Jodhpur. They will soon be hosting reception parties for friends and family.

Priyanka Chopra and Nick Jonas tied the knot in a Hindu ceremony on December 2 as the world waits with bated breath for the crazy pictures to come out. Married in the luxurious heritage property of Umaid Bhawan Palace in Jodhpur, the much-in-love couple turned heads earlier this week as they left for the city from Mumbai with family and friends.

While both their weddings (Hindu and Christian styles) have already commenced with Bollywood and Hollywood celebs sending out love and wishes for the glam couple, the two stunned us all in pictures and videos released of their pre-wedding ceremonies.

Priyanka and Nick hosted a crazy, bigger-than-life and ultra-filmy Bollywood style sangeet ceremony as the bride and groom danced and partied with family and friends.

Priyanka chose a silver-golden style, looking like her character from ‘Dostana’ as she danced with her mother, Madhu Chopra. She then also performed solo, we are hoping also on her famous song.

Meanwhile, her groom Nick Jonas chose a blue silk kurta and pyjamas and also danced. He looked so much at ease with the audience, Bollywood songs, song-and-dance performance. He actually looked like he is ready to give Bollywood a try!

It all began as a fierce song & dance competition between the families but ended, as always, as a huge celebration of love.  Nick and I were looking forward to the Sangeet (musical evening), another pre wedding ritual.. and to see what each side had put together. And what a performance it was. Each family telling our stories through song and dance, filled with lots of laughter and love. We were both filled with gratitude for the effort, the love and the laughter and will carry the memories of this special evening for the rest of our lives. It is an amazing start to a lifetime of togetherness for our families and friends...#grateful @nickjonas 📹/📷: @calebjordanlee @josevilla @josephradhik

In another photo, Sophie Turner (Nick’s sister-in-law and a good friend of Priyanka’s) was also seen shaking a leg in a group performance.

The actress had similarly shared images of her Mehendi ceremony, as she posed with her groom and close family members with henna on her hands and a bright smile on her face.

Priyanka and Nick tied the knot in a Christian ceremony on December 1, officiated by the groom's father, Paul Kevin Jonas Sr. Priyanka wore a stunning custom gown by Ralph Lauren and Nick too opted for a suit by the same label. This is what Priyanka's cousin sister Parineeti Chopra addressed Nick as, after the wedding.

Meanwhile, Priyanka Chopra becomes the first Indian woman to feature on the cover of Vogue America.