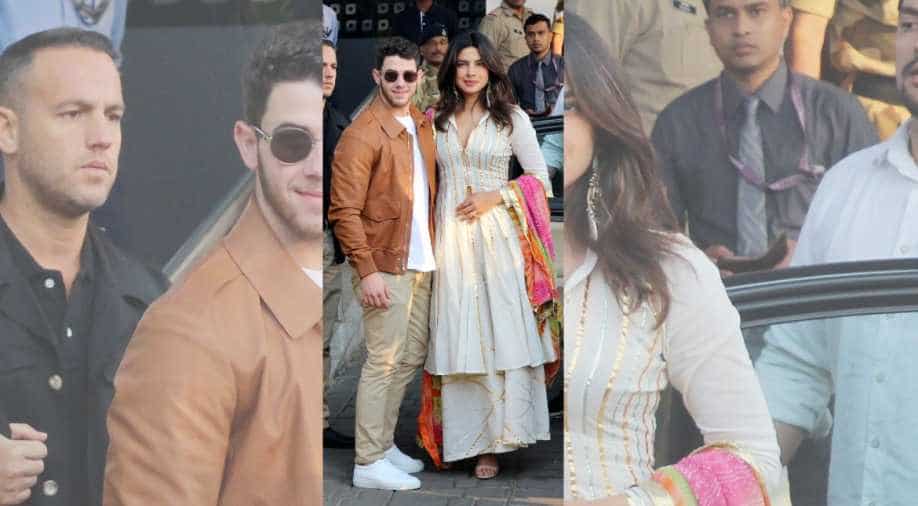 The couple will tie the knot in Jodhpur on December 2 and 3 at Umaid Bhavan Palace. They were seen leaving for the city to kickstart the wedding festivities. (source: @priyankachopra) Photograph:( Instagram )

Priyanka Chopra and Nick Jonas are just a day away from officially becoming man and wife.

Priyanka Chopra and Nick Jonas are just a day away from officially becoming man and wife. Their pre-wedding festivities have kickstarted and they hosted a grand sangeet on Friday night.

The couple, who has been celebrating all week with different Indian traditions and various parties, had their sangeet on November 30 at the luxurious Umaid Bhawan Palace in Jodhpur. A source shared ''Everybody had so much fun  at the Sangeet.''

As per reports, Priyanka, clad in her pink attire dedicated a dance performance to would-be husband Nick. Nick also left everyone surprised as he performed at the ceremony for his ladylove. Apart from the bride and the groom, the sangeet ceremony had Priyanka’s cousin Parineeti Chopra and other Indian and international stars performing on both Hindi and American songs so that everyone could join in the fun.

Earlier, Priyanka claimed in an interview that the guests would need a vacation after participating in the celebrations.

Now that details of the sangeet are out, looks like the former Miss World was not far off the mark.

Joseph Radhik, who is reportedly filming Nick and Priyanka’s wedding posted a story on Instagram that read, “OK. It’s been 8 years of wedding photography, and tonight I may just have witnessed the most amazing Sangeet night of em all. Wow.” Radhik has filmed Virat Kohli and Anushka Sharma’s wedding in Italy, among others.

Earlier on Friday evening, the high profile guests landed at Jodhpur airport to be a part of Priyanka and Nick’s sangeet ceremony. The list of guests spotted by the paparazzi ahead of the sangeet were Nita Ambani along with her daughter Isha Ambani, husband Mukesh Ambani and daughter-in-law to be Radhika Merchant. All the three ladies were decked up in their designer finery for the star-studded sangeet.

Singer Manasi Scott had also shared a few glimpses of herself from the wedding venue ahead of the sangeet. A host of guests including Arpita Khan Sharma along with son Ahil, YouTuber Lilly Singh, television host Anusha Dandekar and her boyfriend Karan Kundra, fashion designer Sabyasachi Mukerjee and makeup artist Mickey Contractor were spotted at the Jodhpur airport heading towards the Umaid Bhawan.