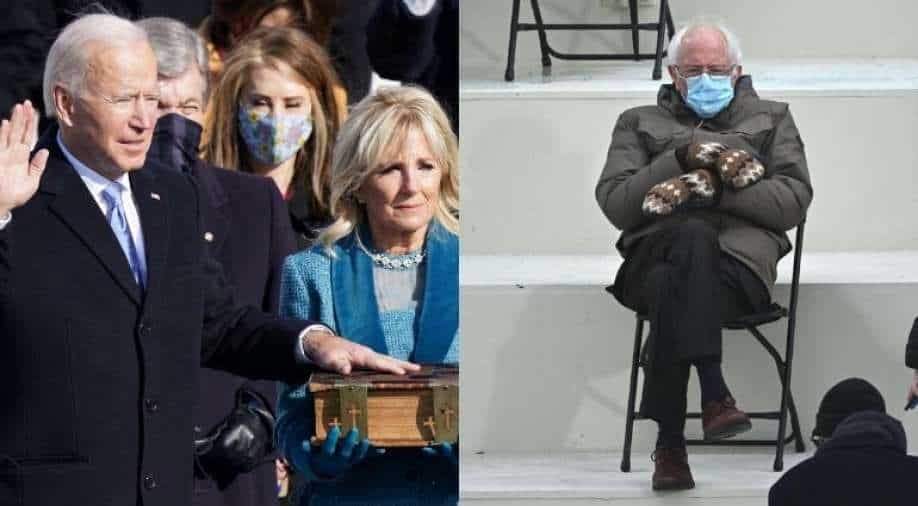 At the Biden-Harris inauguration, Senator Sanders was photographed sitting crosslegged in isolation, wearing mittens, and mask. The image became a subject of hilarious memes. Check them out.

Social media was super active as the world witnessed the ceremony on television. The ceremony was inspiring but it also led to some hilarious memes on the internet and Senator Bernie Sanders featured in a lot of them.

Senator Sanders was photographed sitting crosslegged in isolation, wearing mittens, and mask. The image became a subject of hilarious memes. Check them out.

"I am once again asking for a space heater." https://t.co/2PmfOWFGYE

“This could’ve been an email” pic.twitter.com/kn68z6eDhY

tired of being caught in the tangle of my government pic.twitter.com/a9E4T2wxD9

when I’m early for a movie but didn’t bring a book pic.twitter.com/FCrFnxE3gS

Even Ryan Reynolds took a shot and posted his version of the now popular meme.

Of course, no meme fest is complete without poking some fun at outgoing President Donald Trump and his family.

There were several who wondered where Trump's youngest son Baron was as only Trump and Melania were clicked leaving the White House hours before the ceremony started. A lot of them wondered if the couple had left behind their 14-year-old son at the White House!

barron trump standing at the foot of the biden’s bed tonight asking if they’re his parents now pic.twitter.com/H6MiW4Hv3x

barron trump when he realizes his family forgot him at the white house and now he gets to live with the bidens pic.twitter.com/KFHJ20du5J

ARE YOU BARRON WE HAVE TO GO pic.twitter.com/0ZjPdePqvM

There were also some interesting takes on Trump's apparent letter to Biden before he left the Oval Office.

Then there were some observations about Joe Biden's enormous Bible.

Joe Biden got his Bible from King James himself. pic.twitter.com/XB0vZpYOhA

Joe Biden’s Bible must be the director’s cut. pic.twitter.com/4ZgS34B2ja

The event had Lady Gaga performing. Needless to say, there were a lot of reactions on the singer as well as on Jennifer Lopez and Garth Brooks' acts.

My cat when JLo broke into “Let’s get Loud” 😂 pic.twitter.com/HemrhcnFGU

j lo fighting the urge to break into the extended 11:11 hex hector vocal remix version of waiting for tonight

jennifer lopez in me in
her fifties my twenties pic.twitter.com/TDgQ8OqEub