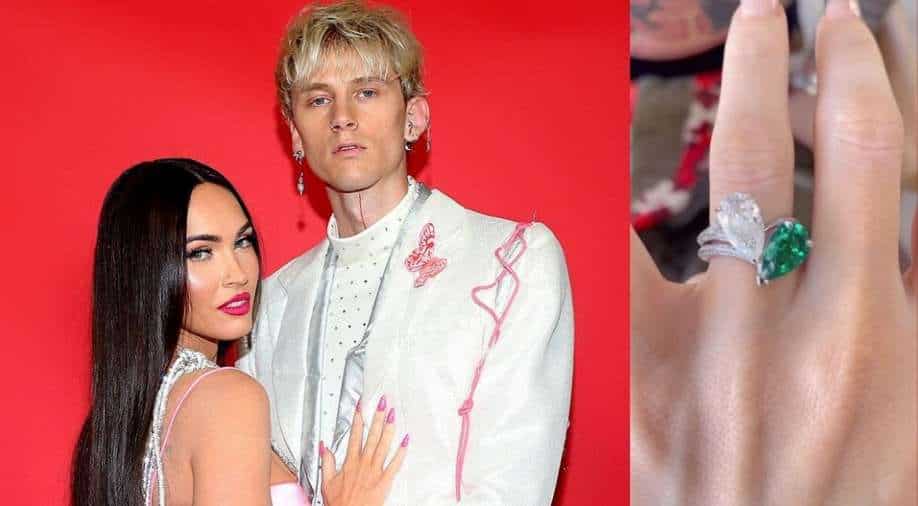 Machine Gun Kelly and Megan Fox announced their engagement last week. Megan's ring, though gorgeous, has a painful aspect to it.

Machine Gun Kelly and Megan Fox announced their engagement last week. Megan's ring, though gorgeous, has a painful aspect to it.

The diamond and emerald ring's band is reportedly made of actual thorns. Machine Gun Kelly told a magazine that he worked with designer Stephen Webster to create the ring.

"It`s a thoroughbred Colombian emerald, with no treatment. It was just carved into the teardrop, straight out of the mine. And the diamond was directly from Stephen," Kelly explained.

He continued, "The concept is that the ring can come apart to make two rings. When it`s together, it's held in place by a magnet. So you see how it snaps together? And then it forms an obscure heart. And you see this right here? The bands are actually thorns. So if she tries to take it off, it hurts..."

"Love is pain!" Kelly then quipped.

He proposed to Fox on January 11. The two later announced their engagement on social media. The musician videoed the proposal on his phone and explained the couple released it on social media to "control the narrative."

"We released it to control the narrative. As opposed to someone just catching a weird cell phone picture of a ring on our hand and being like, 'Whoa!'" he said and added, "I just recorded it on my cell phone. And it wasn't like we had photographers or anything. It was just like me setting my phone against a cup."

Fox and Kelly first began dating after meeting on the set of 'Midnight in the Switchgrass.'

Before her relationship with Machine Gun Kelly, Fox was married to actor Brian Austin Green. The 'Jennifer's Body' actor filed for divorce in November 2020. The former couple shares three children together.