Meet the songwriters behind the 'WandaVision' hit 'Agatha All Along' 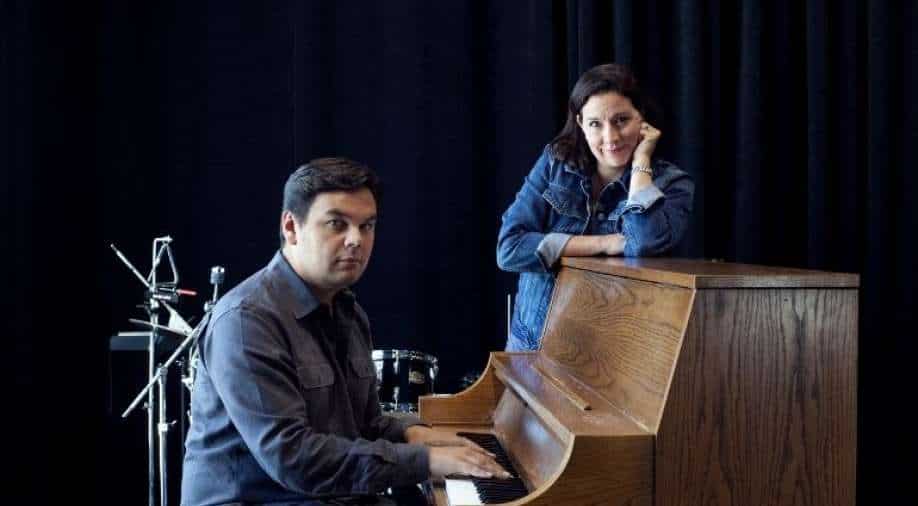 When the song debuted on Spotify and iTunes on Tuesday, it leaped to the No. 1 slot on the iTunes soundtrack charts.

This story contains spoilers for the seventh episode of 'WandaVision.'

If you are a fan of the Disney+ Marvel series “WandaVision,” there are five words that have been stuck in your head for the past week: “It was Agatha all along.”

The 62-second earworm appears in Episode 7, “Breaking the Fourth Wall,” and its purpose is simple: It explains what Wanda and Vision’s nosy neighbor, Agnes (Kathryn Hahn), has been up to this entire time. It has also taken on a life of its own, having spawned numerous trap, rock and rap remixes in the days since the episode debuted Feb 19.

“None of us knew this was going to be the song,” said composer Robert Lopez, 46, who created the songs for the series with his wife of 17 years, Oscar and Grammy-winning lyricist Kristen Anderson-Lopez, 48. “We woke up that morning to find that it was all over the internet, and it was like, ‘This is awesome.’”

It isn’t the first time the songwriting power couple has created an infectious earworm, having written tunes such as the Oscar- and Grammy-winning song “Let It Go” for the Disney animated movie “Frozen” and the Oscar-winning ballad “Remember Me” for the Pixar animated film “Coco.” They’ve won a pile of Oscars, Emmys, Tonys and Grammys between them. (Lopez, who co-conceived and co-wrote the hit musicals “Avenue Q” and “The Book of Mormon,” is in rarefied air as the only double EGOT — someone who has won an Emmy, Grammy, Oscar and Tony, twice over.)

But it is a minute-long riff on “The Munsters” theme that has burned itself into the brains of the collective internet over the past week.

“It’s got an ‘Addams Family’ twist with an electric harpsichord,” Anderson-Lopez said. “It’s super-duper cool and feels like something you’d find in a haunted house.”

Sung by Hahn and a chorus of male backup singers (including Lopez), it delivers the dramatic revelation that Agnes is the powerful witch Agatha Harkness — and that it is she, not Wanda (Elizabeth Olsen), who is behind all the oddities happening in sleepy little Westview. (Having killed a dog, she reveals, was among her dastardly deeds.)

When the song debuted on Spotify and iTunes on Tuesday, it leaped to the No. 1 slot on the iTunes soundtrack charts. (The trap remix created by hip-hop artist Leland Philpot is “the most glorious thing,” Anderson-Lopez said.)

In a phone interview from Connecticut on Wednesday, Anderson-Lopez and Lopez shared how the track came together, their trick for getting their own songs out of their own heads and why Hahn’s character is “perfidious” rather than “hideous.” These are edited excerpts from the conversation.

Q: Did you have any idea “Agatha All Along” was going to blow up like this?

ROBERT LOPEZ: No, not at all. We were sort of sad that we were winding down and we didn’t know if we’d have any hits come out of this thing. But my goodness.

Q: What part of the song came to you first?

LOPEZ: We have a theme — the “WandaVision” motif — that’s in every single song. So that was how we began with “Agatha.”

KRISTEN ANDERSON-LOPEZ: But, in a way, “Agatha All Along” was there all along. We’ve been spoon-feeding a tritone that’s called the devil’s interval — the  'duh-duh-duh' — throughout the series. And then ultimately, when the big reveal happens with the 'DUH! DUH! DUH!', everyone had been hearing it steadily, so it felt like an old friend.

Q: Where did you look for inspiration for the song?

LOPEZ: We started with a different idea for a version of the song more along the lines of “That Girl.”

ANDERSON-LOPEZ: But it just wasn’t right; it just wasn’t churning my blood the way that I wanted it to. So then we thought: It’s a show about witches, right? So let’s embrace it. What other shows are about witches and Goth figures? “The Addams Family,” “The Munsters,” the “Monster Mash” — all these Halloween-y kind of songs that have this grinding, growling bari sax.

LOPEZ: We also have an electric harpsichord, which is what they use in “The Addams Family.” That’s the thing going dit-dit-dit-dit-dit-dit — the repeated chorus.

Q:Who does what when you’re writing a song?

LOPEZ: It changes with every song. Sometimes we’ll write it together in the same room, sometimes one of us will write the whole thing and the other one will take credit. In this case, Kristen wrote the full lyrics and gave them to me on a sheet of paper, and then I went to town with music.

ANDERSON-LOPEZ: I would wake up in the morning, and sometimes I’d be so excited to write the songs that I would write them in the shower. Get out, get a towel, scribble them on a piece of paper with drips, blurring ink — and Bobby would compose them by 10 a.m., and we’d record them after lunch, and then get notes at like 5 p.m.

Q:“Perfidious” is quite the lyric! Where did that come from?

ANDERSON-LOPEZ: We knew we didn’t want to say "hideous," because Agatha is still hot. So I looked at a rhyming dictionary and was like: “'Perfidious!' It’s so great! It’s so perfect!”

LOPEZ: We always have an SAT word in the lyrics somewhere because people appreciate learning a word. And if they already know it, they appreciate being able to brag that they know it.

Q: Your neighbors were not fans of one of your last hits, “Let It Go.” Has reaction been more favorable this time around?

ANDERSON-LOPEZ: It’s still early — they’ve had less than a week. But I’m starting to feel the trickles on Twitter. I’m getting messages saying, “Thank you so much for ‘Agatha All Along,’ now please remove it from my head!” and “It’s been five days, now take it back, please!”

Q: Do the songs you write get stuck in your head, too?

LOPEZ: Of course! You wake up in the middle of the night with it pounding in your ears. But having a song that gets in people’s heads is such an honor for us. It means what we created somehow magically connected across space and time and landed in another person’s neurons. It’s what was in our heads, and now it’s in their heads, and that’s something we now all share.

ANDERSON-LOPEZ:I woke up at 3 a.m. this morning with “She’s insidious / So perfidious” just going on a loop in my head. And so I replaced it with: “Don’t worry, / Ooh, ooh ooh ooh oo-ooh ooh oo-ooh, / be happy.”

LOPEZ: That’s how you get it out of your system …

ANDERSON-LOPEZ: … replace it with another thing that’s been stuck in your head before.