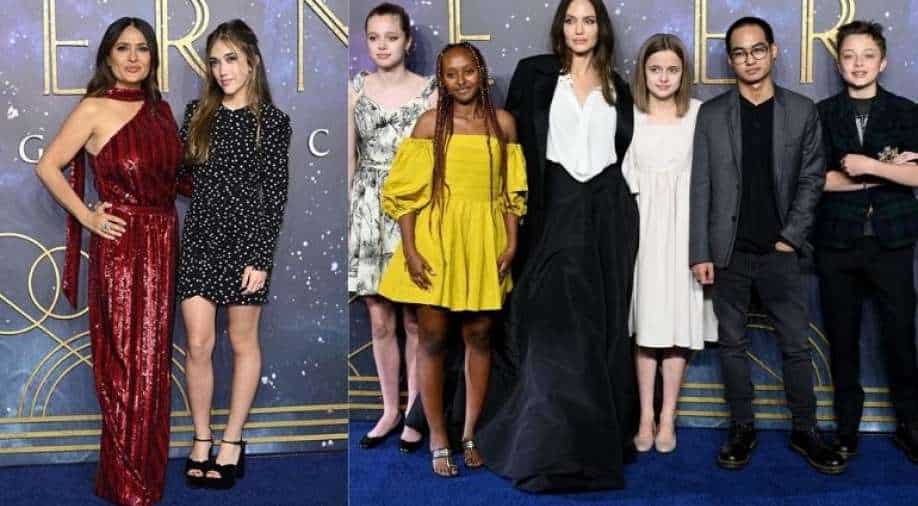 Angelina Jolie and Selma Hayek are making the London premiere of her new film, 'Eternals,' a family affair again!

Jolie, who portrays Thena in the sci-fi drama, arrived at the event in a stunning outfit featuring a black blazer, a white shirt and a flowing black skirt.
Doing again, this time,  Shiloh Jolie-Pitt, 15, walked the red carpet in an altered version of the black-and-white Dior dress, which her mother, wore for a 'Maleficent: Mistress of Evil' press conference in 2019.

The stars of Marvel Studios' #Eternals stepped onto the blue carpet once again for the UK Gala Event in London. 💫 Experience the film only in theaters November 5. pic.twitter.com/2TqXztNamA

Angelina Jolie continues to have the cutest team in the universe supporting her during the #Eternals press tour. ❤️🥺 (📷: Getty)#AngelinaJolie #angelina pic.twitter.com/0f8N0niHDy

"My kids are all mixed with vintage, and in my old Oscars dress. We did all vintage and upcycled my old stuff," Jolie told ET on the red carpet last week.

In pics: Angelina Jolie shines in silver as she attends Rome premiere of 'Eternals' with daughters Zahara and Shiloh

Speaking in ELLE's 2021 Women In Hollywood issue, Jolie opened up about her 'Eternals' co-stars and praised Salma for her "motherhood and power".

'Eternals' debuts in theatres next week.