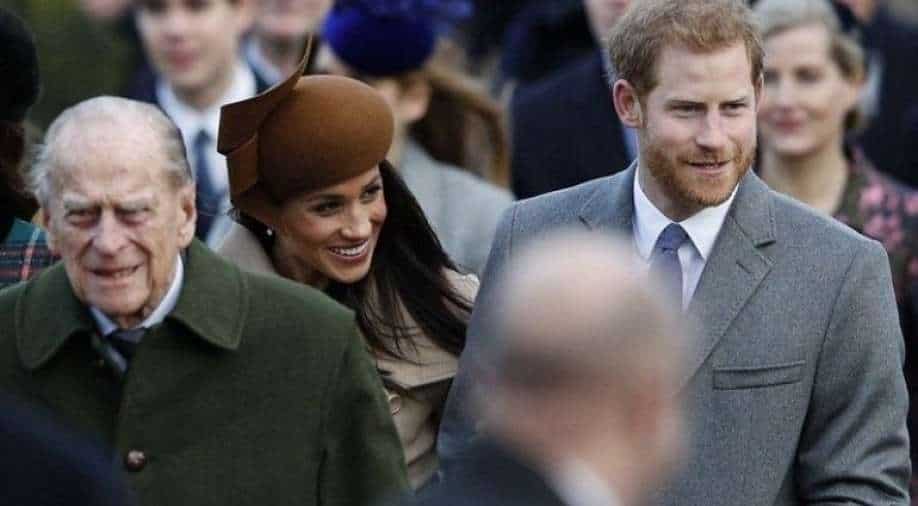 The 39-year-old was watching the funeral on television at home in Montecito, California.

Meghan Markle made sure she was a part of Prince Philip's in a heartwarming way.

The Duchess of Sussex wrote the card attached to the wreath sent by her and Prince Harry to ensure that, in a small way, she played a part in the Duke of Edinburgh's funeral service.

Meghan, who is heavily pregnant with the couple's second child, had hoped to attend the ceremony but was advised against travelling by her doctor.

The 39-year-old was watching the funeral on television at home in Montecito, California.

As it happened: Prince Philip laid to rest in Royal Vault at Windsor Castle

The Sussexes' tribute was among nine family wreaths laid in the Quire of St George's Chapel, propped against the stalls on each side of the Duke's coffin.

A source close to the Sussexes confirmed to The Telegraph that theirs had been designed and handmade by Willow Crossley, a Cotswold florist known for her natural, rustic arrangements.

The variety of locally sourced flowers, some of which were picked from the designer's garden, were chosen due to their particular significance.

Prince Harry and Meghan asked for it to include Acanthus mollis, or bear's breeches, the national flower of Greece, to represent the Duke's heritage; Eryngium, or sea holly, to represent the Royal Marines; Campanula, to represent "gratitude and everlasting love"; rosemary to signify remembrance; lavender for devotion, and roses in honour of the Duke's birth month of June.

Meanwhile, a spokesman for the Sussexes confirmed that the Duke was wearing his KCVO Neck Order and Star, Afghanistan Campaign medal, Gold Jubilee medal, and Diamond Jubilee medal and highlighted the "unique connection" he had with his grandfather in their shared active service – including in combat – as part of the British Armed Forces.

He noted that the Duke of Edinburgh was a decorated Naval officer whose military career spanned the Second World War, while his grandson's 10 years of active-duty service included two tours of duty on the frontlines in Afghanistan.