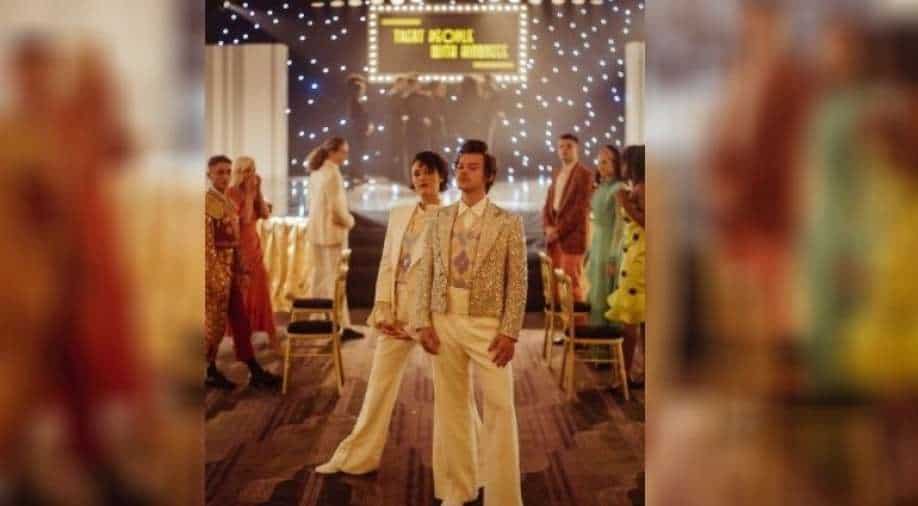 The Fleabag and Killing Eve creator appears as a punter at the club in a white 1930s-style suit of her own, sipping a martini, before being led on stage by Styles to reveal matching sequined golfing sweaters.

Harry Styles gave his fans a kind gift featuring a surprise cameo. The singer released the music video of his new song 'Treat People With Kindness', and the song stars none other than 'Fleabag' writer-actor Phoebe Waller-Bridge.

The pop star is capping off a year of chart-topping success and Grammy nominations for his sophomore album 'Fine Line' with a surprise black-and-white visual feast. The song sees Styles as a cabaret star performing in a nightclub, decked in a head-to-toe Gucci look featuring a glittering cropped tuxedo jacket, high-waisted Jazz Age trousers, and a Fred Astaire-like sequined bow tie.

The Fleabag and Killing Eve creator appears as a punter at the club in a white 1930s-style suit of her own, sipping a martini, before being led on stage by Styles to reveal matching sequined golfing sweaters. The pair bust out a routine together.

The final shot gives a nod to Fleabag's character as Waller-Bridge is seen holding Styles while looking cheekily to the camera.

In November, Harry Styles made history as the first-ever solo male to appear on the cover of Vogue. For this momentous cover, he dazzled in a Gucci ball gown and appeared inside the issue in a series of designer duds, from Comme des Garçons Homme kilt to a deconstructed Victorian number was created by Harris Reed.

Though many praised the cover, New York Times best-selling author Owens criticized it. “There is no society that can survive without strong men,” she wrote on Twitter. “The East knows this. In the west, the steady feminization of our men at the same time that Marxism is being taught to our children is not a coincidence. It is an outright attack. Bring back manly men.”

That was not the first time Styles has played around with fashion in bold ways. The singer wore a black dress by the Japanese brand Commes Des Garçons on the cover of the Guardian Weekend and defended the queer aesthetics of his visual work. “I’m not just sprinkling in sexual ambiguity to be interesting,” he said. “I want things to look a certain way. Not because it makes me look gay, or it makes me look straight, or it makes me look bisexual, but because I think it looks cool.”