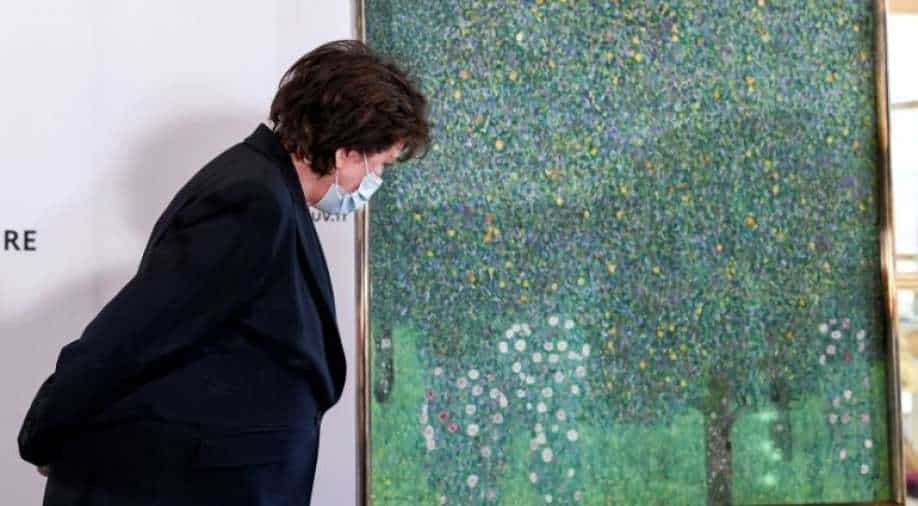 French Culture Minister Roselyne Bachelot stands next to the painting "Rosebushes under the Trees" by Austrian painter Gustav Klimt, during an event to announce the restitution of the artwork to a Jewish family from which it had been despoiled in 1938, at the Musee d'Orsay in Paris, France Photograph:( Reuters )

'Rose Bushes Under Trees', painted by the Austrian artist around 1904-05, will be returned to the family of Holocaust victim Nora Stiasny, who had to sell the painting at a knockdown price to survive financially after the Nazis annexed Austria in 1938

French Culture Minister Roselyne Bachelot has announced that the country will return a masterpiece by Gustav Klimt to the heirs of its owner, more than 80 years after she was forced to sell it in the Nazi era.

'Rosiers sous les Arbres' or 'Rose Bushes Under Trees', painted by the Austrian artist around 1904-05, will be returned to the family of Holocaust victim Nora Stiasny, who had to sell the painting at a knockdown price to survive financially after the Nazis annexed Austria in 1938.

The art dealer, a Nazi sympathiser, held on to it until his death and France, unaware of its history, eventually bought it at auction for its Musee d'Orsay museum in 1980, the minister added.

"The restoration of looted items is an ardent obligation. It is the honour of the Republic to do so, the honour of France," she said.

The painting was bought in 1911 by Stiasny's uncle, a Jewish Austrian collector named Viktor Zuckerkandl.

She was forced to sell it very cheap shortly after the Nazis came to power in Austria in 1938 at a time when Jewish families were being frozen out of the economy.

It was bought by Stiasny's former lover, Philipp Haeusler, who had joined the Nazi party and managed to hide his past after the war.

Stiasny died in 1942 along with her husband and son. It is not clear whether they were in the Polish ghetto of Izbica or the Belzec concentration camp.

France acquired 'Rose Bushes Under Trees' from a Swiss gallery in 1980 for its soon-to-open Musee d'Orsay in Paris, knowing nothing of its violent history.

"The decision we've taken is obviously difficult. It means removing a master-work from the national collection that is the only painting by Gustav Klimt that France owns," said Bachelot.

"But I'm not heartbroken over it, quite the contrary."

She added that it had been a challenging process due to the destruction of evidence and the erosion of family memories.

The work will go to the descendants of Stiasny's sister, Hermine Mueller-Hofmann, who managed to escape the Holocaust.