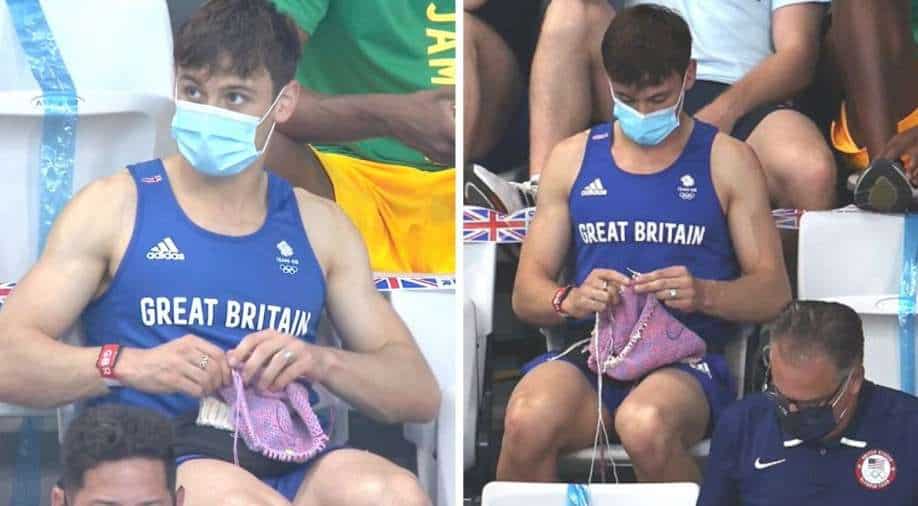 Daley, an Olympic gold medallist and an LGBTQ icon in Britain was clicked knitting as he watched women's 3m springboard finals.

Great Britain's diver Tom Daley has caused quite a stir at the Olympics just by sitting at the stands and watching women's 3m springboard final on Sunday morning.

Daley, an Olympic gold medalist and an LGBTQ icon in Britain was clicked knitting as he watched women's 3m springboard finals.

A sports star casually knitting a pink pouch is a rare sight and hence social media was flooded with images of 27-year-old Daley on Sunday as he, wearing his country's jersey, sat wielding needles at the Tokyo Aquatics Centre.

Daley watched the third round of the dives when China's Shi Tingmo took the lead. No British divers were competing at that moment.

Oh this? Just Olympic champ @TomDaley1994 knitting in the stands while watching the diving. 🧶 pic.twitter.com/o17i6vsG2j

The perfect de-stress activity! So great to see @TomDaley1994 bringing his knitting with him to the Olympics. https://t.co/U20WDGU4zl

not tom daley knitting at the olympics i- pic.twitter.com/E70zamUhvk

i am so warmed by tom daley knitting himself a little pouch for his olympic medal pic.twitter.com/OojA330YHk

The British diver won his first Olympic medal alongside Matty Lee in the synchronised 10m event that took place on Monday.

It seems Daley is fond of knitting and is also good at it. Earlier last week, the gold medalist had showed off "a little cosy" which he had knitted for his gold medal "to stop it getting scratched".

The woolen pouch has Great Britain's flag on one side and the Japanese flag on the other side.

"The one thing that has kept me sane throughout this whole process is my love for knitting and crochet and all things stitching," he told followers on his Instagram knitting page which has over 100, 000 followers. Daley uses the platform to showcase his various woolly creations.

This is Daley's fourth Olympic Games. His win last week is his third Olympic medal. He has previously won two Bronze medals.