'Koffee With Karan' new promo has Saif Ali Khan, daughter Sara and it looks a lot of fun 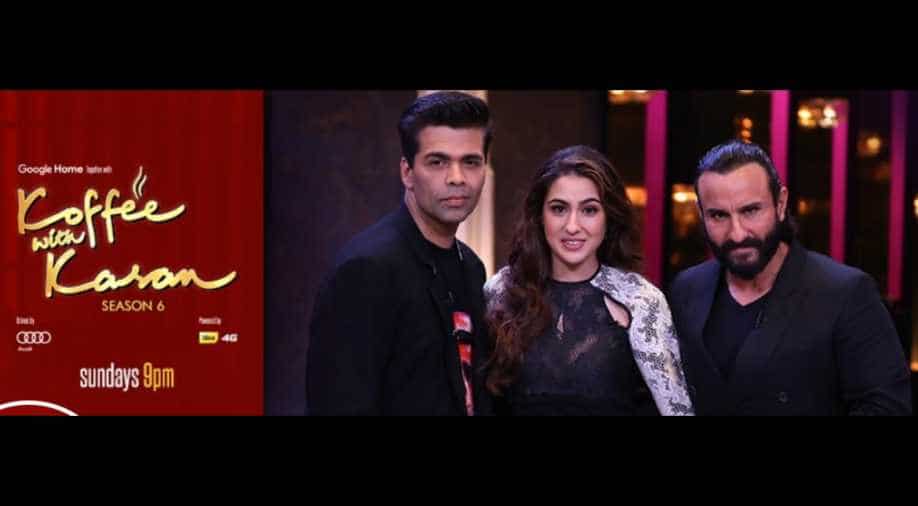 Saif Ali Khan with Sara on the sets of 'Koffee With Karan' Photograph:( Instagram )

The new episode will premiere on Sunday, November 18.

As we told you earlier, Koffee With Karan will now have the father-daughter duo of Saif and Sara Ali Khan who are set to break stereotypes all the way if we go by what we are seeing in the promo videos released.

Karan Johar, who hosts the hit TV show was in his usual elan as he asked some personal questions to Saif in front of Sara, making her squirm and get restless.

Also read: Koffee With Karan: Aamir Khan opens up about his divorce from ex-wife Reena, calls it 'traumatic'

In one Karan talks about how Saif’s wife Kareena Kapoor Khan has made the gym look sexy, to which Saif replied: “And I get a close up look at it in the bedroom before the departure.”

This went the alarm bells ringing as Sara found herself visibly embarrassed.

Karan then asked Saif what he would ask any prospective boyfriend of Sara. “Political views, drugs,” Saif says as Karan interrupts him, “Money would be a nice question to ask. I would ask that.” Saif then said,  “Got cash? Take her.” The answer shook Sara who said, “That sounds so bad!”

Karan also fired some questions Sara’s way. He asked her who she would marry and date. Sara replied: “I would like to marry Ranbir Kapoor but date Kartik Aaryan.”

The new episode will premiere on Sunday, November 18.