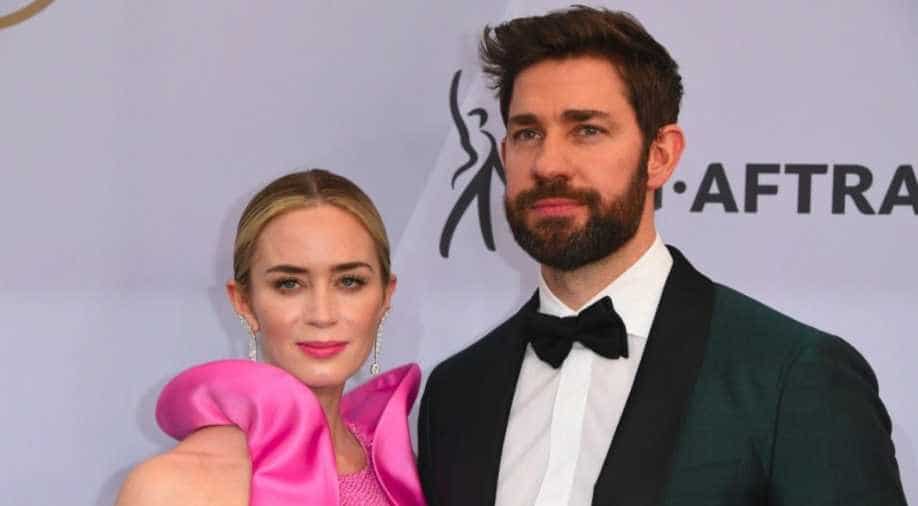 Krasinski during his first episode of `SNL` featured in a `The Office` themed monologue and a variety of sketches.

American actor John Krasinski`s daughters are always on his mind, even when he is busy hosting the insanely popular American show Saturday Night Live (SNL). The 41-year-old actor, who made his hosting debut over the weekend on SNL, gave a special shout-out to his daughters, reported E! News.

At the end of the night, Krasinski wore a special shirt in honour of his children, while thanking musical guest Machine Gun Kelly and the cast during his closing remarks. Krasinski shares two daughters with his wife and actor Emily Blunt, who he married in 2010.

Thank you, @johnkrasinski and @machinegunkelly!

`The Quiet Place` actor and director had the initials of his daughters -- 6-year-old Hazel and 4-year-old Violet stitched on his final outfit. The actor`s ensemble consisted of a Boglioli long sleeve and Missoni pants.

"John wanted to have his daughters` initials monogrammed on his shirt for SNL goodnight looks," his stylist Ilaria Urbinati shared on the Instagram story, adding the hashtag #Girldad.`The Office` actor, whose web series `Some Good News` was recently acquired by CBS All Access, tends to keep his children mostly out of the public eye.

Pics of kids should only come direct from parents. So I'm thrilled to introduce you guys to Hazel!!! #NoKidsPolicy pic.twitter.com/qVvUTRdllP

'No Time To Die' to 'Death on the Nile': Movies rescheduled due to the pandemic

However, he recently shared that his work is all about his family life. In 2019, he spoke at the Critics` Choice Awards about how his directorial debut `A Quiet Place` was a "love letter" to his family. In the film, which John also co-wrote, he and Emily played a married couple hiding from monsters that hunt by sound. Accepting the award for Best Sci-Fi/Horror Movie, Krasinski had said, "I got to make a movie about a love story and a love letter to my kids.

I got to do it with the love of my life by my side, so I`m pretty sure it doesn`t get much better than that. Thank you so much."Meanwhile, on the film front, the sequel to Krasinski`s hit movie `A Quiet Place` is slated to come out later this year after being pushed back from its 2020 release date due to the coronavirus pandemic. Paramount has delayed `A Quiet Place Part II` to September 17 for a theatrical release.

This move comes after the sequel was initially pushed from September 4, 2020, to April 23, 2021.It features original cast-members including Emily Blunt, Millicent Simmonds, and Noah Jupe and newcomers include Cillian Murphy and Djimon Hounsou.

The 2018 film `A Quiet Place` had scored big with critics and went on to earn an Academy Award nomination for best sound editing, along with several Critics` Choice nominations. The movie went on to gross USD 340.9 million worldwide on a USD 21 million budget, making it one of the year`s biggest success stories for an original film.