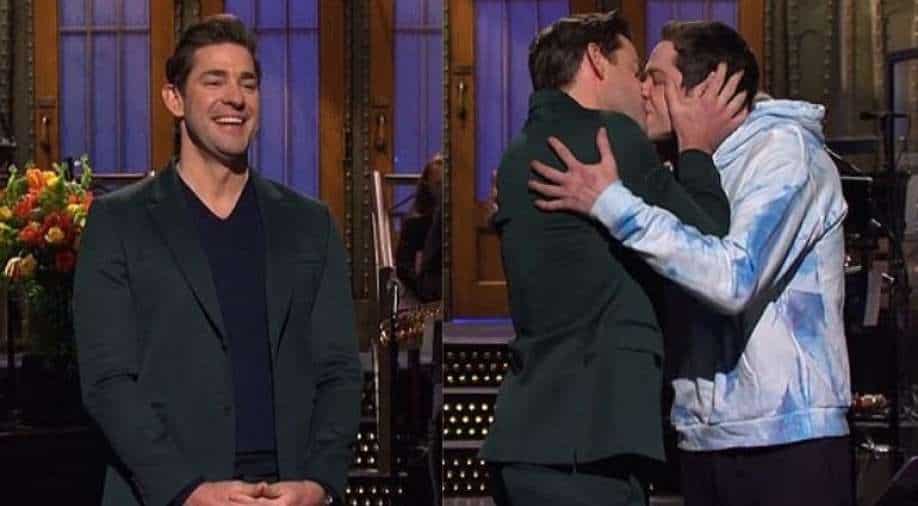 John Krasinski became known for his role as 'Jim Halpert' on the NBC sitcom The Office, which ran for nine seasons from 2005 to 2013 on NBC.

John Krasinski finally made his hosting debut on 'Saturday Night Live'.  'The Quite place' actor kicked off his debut with a passionate kiss with cast member Pete Davidson.

During his opening monologue, he was interrupted by several 'The Office' fans — played by Alex Moffat and Kenan Thompson, who said: "Hey Jim, I have a question. My question is you're Jim from The Office." and lastly, one more fan, joined and asked, "Kiss Pam, I need you to kiss Pam. That is what I need to see today," he said as Krasinski once again attempting to clarify to all that it was fiction and there is no Pam in real.

In between Pete Davidson also jumped on the stage, by confusing them that he was fictional Office character Pam Beesly, and to complete the fans wish, Pete suggested that John “just kiss” Pam, meanwhile, the audience started chanting, 'Kiss Pam, kiss Pam, kiss Pam!' the audience chanted.

As there was no Pam on stage so, John looked into the camera and said 'Why not?' and then grabbed Pete‘s face and gave him a big smooch on the lips.

The two-time SAG winner, 41, became known for his role as Jim Halpert on the NBC sitcom 'The Office', which ran for nine seasons from 2005 to 2013 on NBC.