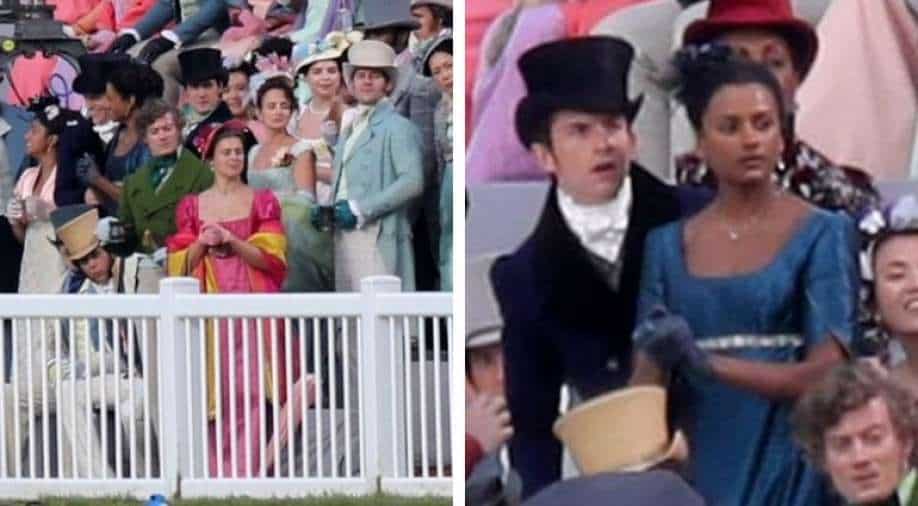 The forthcoming season of the show will focus on Lord Anthony Bridgerton, Daphne's elder brother.

The second season of 'Bridgerton' has officially started filming and here are some photos from the set which are all over the internet.

The picture shows the cast of the hit Netflix show, who are back on the set along with the newcomers. In the photo, Jonathan Bailey, who is reprising his role as Anthony Bridgerton, was spotted along with Simone Ashley, who plays Anthony's love interest Kate Sharma in the forthcoming show.

The picture shows the couple all decked up in the Regency era costumes while they enjoy a day at the races. Kate is looking stunning in a striking peacock blue gown. Another star who was spotted in the scene was Adjoa Andoh aka Lady Danbury, who was a mentor to the Duke of Hastings Simon Basset played by Regé-Jean Page, Luke Newton (Colin Bridgerton), Luke Thompson (Benedict Bridgerton), Claudia Jessie (Eloise Bridgerton), Ruth Gemmell (Lady Violet Bridgerton) and Adjoa Andoh (Lady Danbury). However, the first season leading lady Phoebe Dynevor, who played Daphne Bridgerton was not spotted at Royal Ascot.

Jonathan Bailey and Simone Ashley as Anthony e Kate for the season 2 of #Bridgerton pic.twitter.com/wJt6b4VO5g

I LOVE HER SO MUCH #Bridgerton pic.twitter.com/7Iu4blOq4u

The forthcoming season of the show will focus on Lord Anthony Bridgerton, Daphne's elder brother and his journey to find love. The storyline is based on author Julia Quinn’s 'The Viscount Who Loved Me.'

The first season was a massive hit and become Netflix most-watched show after few weeks of its release. The S1 focused on the romance between Daphne Bridgerton, played by Phoebe Dynevor, and Simon, Duke of Hastings, the role which Rege-Jean Page, who unfortunately is not returning in the second season. For the unversed, the period drama will be back for a third and fourth series, Netflix has confirmed.