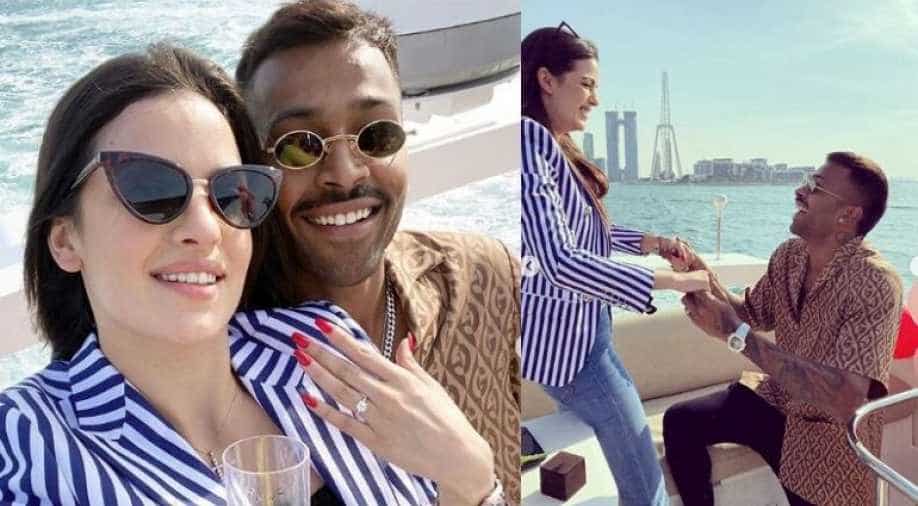 Hardik Pandya and Natasa Stankovic got engaged on the first day of the new year Photograph:( Instagram )

The flamboyant cricketer popped the question to girlfriend, Serbian model-actor Natasa Stankovic on the first day of the new year.

Trust Hardik Pandya to make a marriage proposal in style. The flamboyant cricketer popped the question to girlfriend, Serbian model-actor Natasa Stankovic on the first day of the new year.

Pandya went down on his knees while onboard a ferry and proposed to Natasa in Dubai and posted the video on Instagram later.
The cricketer took to Instagram to share the photo with the actor and captioned the post as: "Mai Tera, Tu meri jaane, saara Hindustan. 01.01.2020 #engaged".

In one photo, Stankovic can be seen flaunting her ring. The couple got engaged in Dubai and were seen taking a ferry ride along with close friends.

On the work front, Stankovic was last seen in a song from Bollywood movie `The Body` starring Emraan Hashmi and Rishi Kapoor.
She had also made it to the finals of `Nach Baliye` with her ex-boyfriend Aly Goni earlier this year.

In 2019, the Board of Control for Cricket in India (BCCI) had confirmed that Pandya underwent a lower-back surgery in London.