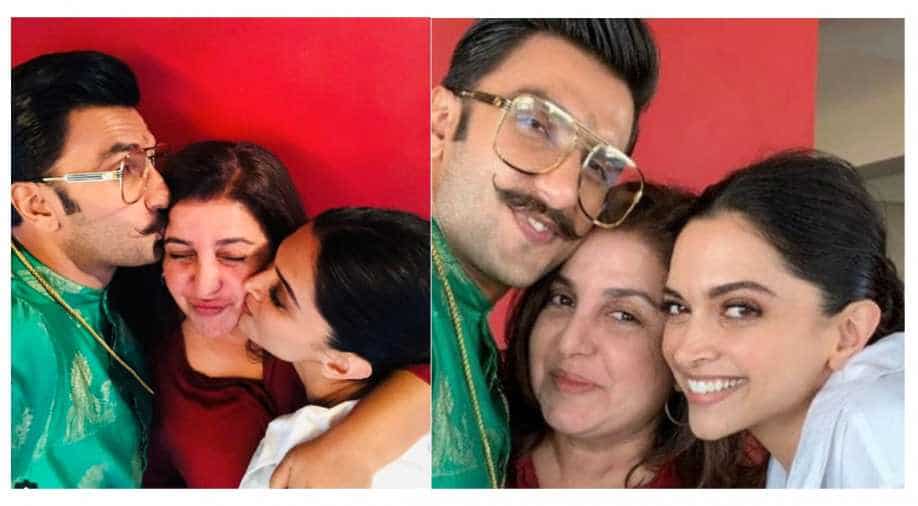 Deepika Padukone and Ranveer Singh tied the knot yesterday in a Konkani-style wedding with only a few guests attending the four-hour long intimate ceremony. They will soon tie the knot in a Sindhi-style wedding today.

Deepika Padukone and Ranveer Singh tied the knot yesterday in a Konkani-style wedding with only a handful number of guests attending the four-hour long intimate ceremony. They will soon tie the knot in a Sindhi-style wedding today, after which it is said that there will be some photo releases for social media consumption.

The couple reportedly invited only a few Bollywood celebs for the wedding functions including Shah Rukh Khan, Sanjay Leela Bhansali and Farah Khan. Whether they reached the venue to bless the couple, is still unclear.

Choreographer and filmmaker Farah Khan who plays an important role in Deepika’s career (as she launched her in debut film ‘Om Shanti Om’) was among the few who was visited upon by the couple to be personally invited. Even though the couple announced their no-gifts policy (they have asked guests to donate to their charity instead of giving gifts), Farah planned a surprise gift for them even before they left to Italy for the fairytale wedding.

May you LOVE happily ever after! #soninlawlove 😜#marriageblessings @deepikapadukone @ranveersingh ♥️♥️♥️

My baby’s getting married!! Lov u @deepikapadukone n @ranveersingh .. for coming home ♥️now just follow all the instructions on the card i gave you ll😄

When Deepika and Ranveer went to the visit Farah at her Mumbai residence after visiting Sanjay Leela Bhansali, they were made to give clay impressions of their hands. It was made by casting impression Bhavna Jasra who has previously made mementoes for Prime Minister Narendra Modi, Akshay Kumar and other prominent personalities.

Bhavna revealed how Farah surprised Deepika and Ranveer during their visit to a daily and said, "Farah is a dear friend. She called me one morning asking me if I could come to her place, as she wanted to make a special wedding gift for Deepika and Ranveer. She wanted to surprise them and literally hid me in another room.”

Bhavna Jasra “impresses” Deepika & Ranveer #DEEPVEER with her art !! . . This will certainly be one of our most cherished impressions ever taken and our HEARTIEST CONGRATULATIONS to the lovely power couple of Indian Film Industry @deepikapadukone & @ranveersingh . . We wish them love & togetherness, forever & ever!! We are extremely exhilarated to make this symbol of their everlasting love for each other as they begin their journey as Man & Wife !! . . @farahkhankunder - We thank you for making us a small part of this big love story!! . . #FirstImpression #CastingImpression #Luxury #Premium #Gifting #HandandFeet #Couple #Bhavnajasra #DeepikaPadukone #RanveerSingh #DeepveerWedding #DeepikaRanveerWedding #clientdiaries #Newborn #Comfortable #memories #Creative #Frames #Masterpiece #CherishForever #CoupleCasting #FarahKhan #Bollywood #Celebrity #BollywoodGosssip #WeddingGift #WeddingMemento

She continued: "I heard them arrive and greet Farah with great affection. Farah then told them that she has organised a surprise gift for their wedding and called out my name to do the honours. They greeted me with happy smiles and on knowing what the surprise was, they gleamed with joy. Directing the couple on how they should put their hand together to make a tight clasp was a special moment. I felt as if time stood still when Ranveer and Deepika posed for pictures with their hands clasped tightly in my clay. Thank you, Farah, for making me a part of Ranveer and Deepika's love story.”

Meanwhile, we along with the nation are waiting for the official pictures to come out today in the evening.