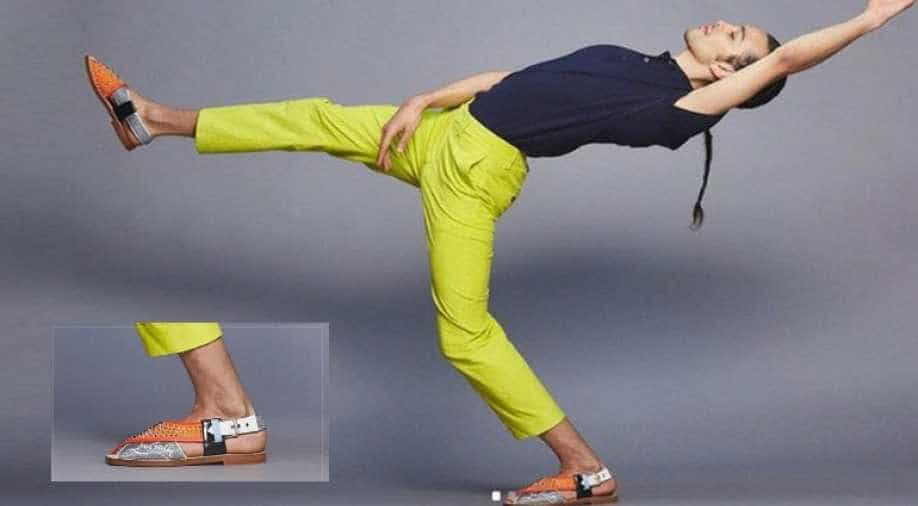 Louboutin posted on Instragram the images of 'Imran Sandal'but removed them soon after. Photograph:( Instagram )

The 'Imran sandals' have studs, Louboutin's trademark red soles, and the brand's logo.

Christian Louboutin has decided to give the popular Peshawari chappals a new name and look. Popular with men in the subcontinent, Peshwari chappals have been christened as 'Imran sandals' by the designer.

The footwear is popular amongst men in the sub-continent when they wear traditional attire. While many felt that the designer has named them after the current Prime Minister of Pakistan, Imran Khan, there has been no official confirmation from the designer or his label so far. Many also feel it could have been named after Louboutin`s Pakistani friend, artist Imran Qureshi.

The 'Imran sandals' have studs, Louboutin's trademark red soles, and the brand's logo.

In 2014, British menswear designer Paul Smith found himself in hot waters when he replicated the Peshwari chappals as his own and sold them in the market for a whopping 300 pounds.

As a result, the brand changed the shoe`s description on its website to "inspired by Peshawari Chappal".

However, less than 24 hours after the Louboutin's official Instagram handle shared the image and it went viral, the picture pulled down from social media and the design house’s official website. No official statement regarding the removal of the post has been issued yet.

The post, which went viral in no time, has got the internet divided. While some have given a thumbs up to the design, others have slammed Louboutin for "cultural appropriation”.

Also they are named, "Imran Sandal's". @ImranKhanPTI is the brand ambassador of Peshawari Chapals and he has made them world famous. https://t.co/HyMzPzh9sh

After #PeshawariChapals, We've now #ImranSandals...! We looked for statecraft; instead new brands of shoecraft coming up. https://t.co/W3JeemS67k

awful, Imran's sandals in reality are quite decent compared to these.

Peshawari chappal launched & renamed as Imran sandal by french designer Christian Louboutin.. don't quite like the new look though...
https://t.co/ye2zNPJuI1