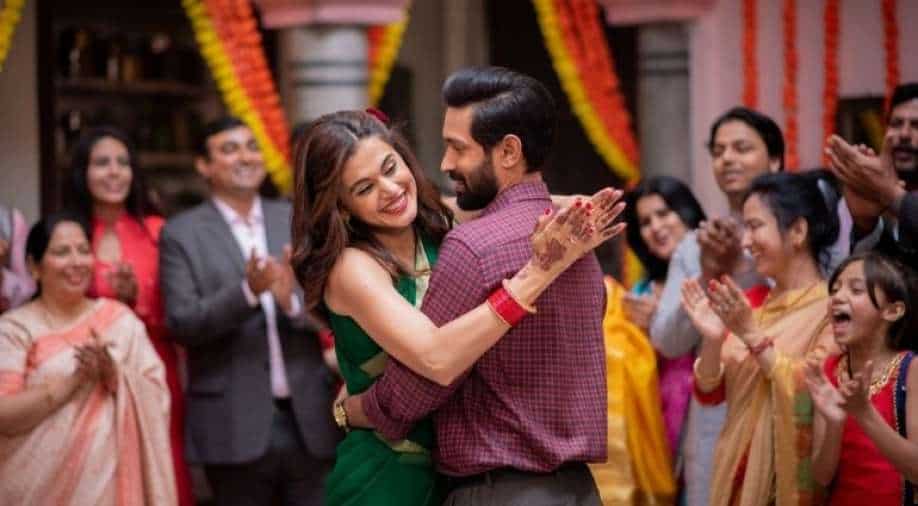 Written by Kanika Dhillon, 'Haseen Dillruba' attempts to be an unconventional love story. Based on the theme of popular Hindi pulp fictions novels, the story uses the tropes of small towns in northern India to weave an intricate story of love, crime and passion.

Filmmaker Vinil Mathews' latest 'Haseen Dillruba' begins on an intriguing note. A quiet bylane of Jwalapur in Haridwar is rocked by a blast one morning. Initial investigations seem to suggest that Rishabh aka Rishu has died at his home due to a cylinder blast. The cops suspect foul play and question Rishu's wife Rani - the only person who was around when the incident took place. They're also suspicious of Neel, a distant cousin of Rishu and Rani's clandestine lover.

Written by Kanika Dhillon, 'Haseen Dillruba' attempts to be an unconventional love story. Based on the theme of popular Hindi pulp fictions novels, the story uses the tropes of small towns in northern India to weave an intricate story of love, crime and passion.

A big-city girl 'settles' for a small town engineer who is head over heels in love with her. She thinks he is an average joe, even though he has a stable job in the state electricity board and dotes on her from the first day. He feels lucky and slightly nervous around his gorgeous wife. But the initial attraction wears off in almost a week for him and while she keeps trying to seduce him, he is unable to reciprocate in any way. Enter a new relative, an alpha man, who somehow convinces the rebel woman to enter the kitchen and woo him with good food- a quality that she lacks. There is sexual tension between the two and a torrid affair is inevitable. But will the husband know? Will she leave him for her lover? All these questions persist when the blast puts the wife in a spot- making her the prime suspect in the case.

While the film's first half is quirky and well-written, the second half, when the mystery slowly starts to unravel, appears rather stretched. The portions when Pannu's character revisits the past and how her and Rishu's story began- are well-enacted and even entertaining especially due to actress Yamini Das, who plays a shocked mother-in-law to a rather brazen daughter-in-law. Das is well-cast and in a limited part lights up the screen with her performance.

Much like her previous films 'Kedarnath' and 'Mannmarziyaan', Dhillon makes the female character the most complicated one in 'Haseen Dillruba'. Rani is aware of her good looks, and the power she has on men. By her admission, she is 'homely' and domesticated, even though she is least interested in doing any household chores. A conflicted character, Rani is similar to Dhillon's Rumi from 'Mannmarziyaan'- both played by Taapsee Pannu who has by now perfected the art of playing such characters on screen. They are dishevelled at the slightest of the crisis, they think they have everything in control and crave male attention. Rani is flawed, rude and someone you will not want in your life and yet Rishu falls head over heels in love.

Among the men, Rishu (Vikrant Massey) - much like Rani - is a complicated character. He looks like a naive young man who easily falls hard in love but he has his own quirks which are borderline toxic.

Perhaps the most linear character is that of Neel (Harshwardhan Rane) even though he is projected as a mysterious sexy lover who knows how to woo a bored housewife. Both Massey and Rane are good in their respective parts even though they play secondary characters to Pannu, they hold their own. Massey especially is well-cast as the small-town do-gooder Rishu who doesn't know how to be around a gorgeous, upfront woman like Rani.

What starts off as an interesting - even though slightly predictable - love story set in a small town, soon turns dark. As Rani sits at the police station narrating her story to Inspector Rawat, she often borrows lines from her favourite author Dinesh Gupta's pulp fiction novels and describes her definition of love, which she feels is incomplete without a bit of sacrifice. But the references to books that both Rani and Rishu love are also sketchy- only borrowing heavily during the climax.

A tale of crime and passion should ideally be high on suspense. It should keep the viewer hooked till the end but 'Haseena Dillruba' falters at every step as the story slowly unravels. There is a lack of chemistry between the leads and it takes time to accept their story of passion and love. The suspense never builds up. The character development of Rani and Rishu is slightly illogical. And in the name of passion and true love, a lot of toxicity is belted out where the woman seems to be okay at being tortured by her husband just because she has cheated on him.

The climax is underwhelming and you end up rolling your eyes a bit too much towards the end.

'Haseen Dillruba' excites the viewer only in parts and those are not related to the murder mystery that it sets out to be.

'Haseen Dillruba' is streaming on Netflix.