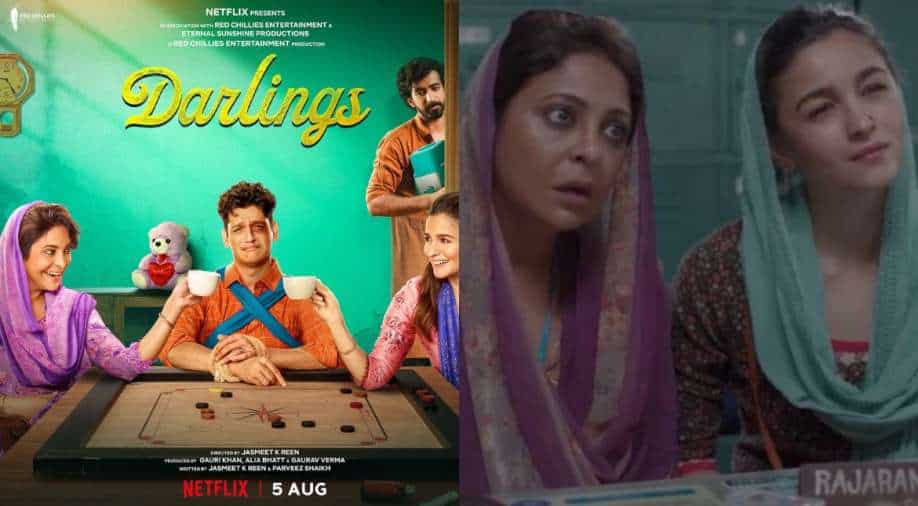 'Darlings' is billed as a dark comedy-drama which explores the lives of a mother-daughter duo trying to find their place in Mumbai, seeking courage and love in exceptional circumstances while fighting against all odds.

Alia Bhatt is among those stars who do not hesitate to experiment. She has also been seen proving her mantle in versatile roles in films such as ‘Gangubai’ and ‘Dear Zindagi’. The actor is stepping into the shoes of a producer with ‘Darlings,' whose teaser was dropped today. On Tuesday, Alia took to Instagram and surprised everyone by sharing a teaser of the film that featured actors Shaifali Shah, Vijay Verma, and Roshan Mathew. "It's just a tease, Darlings," she captioned the clip.

The one-minute 39-second teaser begins with Alia watching a movie in a theatre when a voiceover starts to narrate a fable about a frog resting by a river, who happens to befriend a scorpion. Alia Bhatt and Vijay Varma are the metaphorical frog and scorpion, going by the narrative, but their roles are not defined. There are also a few scenes between Alia and Shefali in the film that are intriguing and mysterious. In one scene, Shefali Shah and Alia Bhatt are seen grinning, while Vijay Varma appears confused. Alia and Shefali are seen sitting in a police station, when Alia can be heard saying, "The killing was just in our imagination." The teaser also suggests that there is a murder angel involved in the film. The film's teaser features a super cast and humorous undertones in a very bleak environment.

‘Darlings’ is billed as a "dark comedy-drama which explores the lives of a mother-daughter duo trying to find their place in Mumbai, seeking courage and love in exceptional circumstances while fighting against all odds." The film is helmed by Jasmeet K Reen, who is also the writer of ‘Force 2', marks Reen's debut as a director. Produced by Gauri Khan, Alia Bhatt, and Gaurav Verma, ‘Darlings’ will be out on Netflix on August 5.

On Monday, Alia Bhatt teased her fans with a short promotional clip that showed the dark world of film. She wrote, "Thoda dark ... thoda comedy. Darlings teaser out tomorrow."

Streaming giant Netflix also shared a teaser and posters in a quirky post. "Kya ek meindak aur bichhoo dost ho sakte hain? (Can a frog and a scorpion be friends). Darlings, watch on 5th August, only on Netflix", the post read.