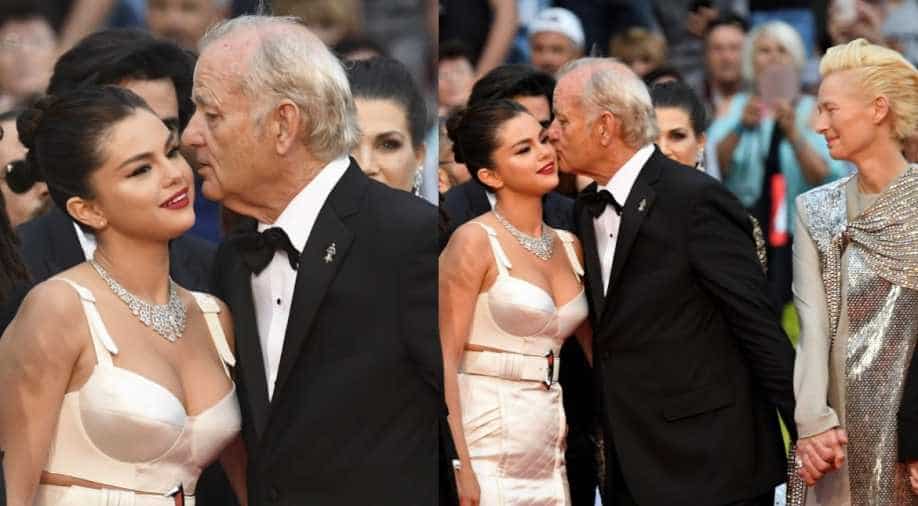 Selena Gomez gets a peck on her cheek from Bill Murray. Photograph:( AFP )

After their scintillating appearance at Cannes for the premiere of their film 'The Dead Don't Die', Bill was asked as to what he whispered in her ear, to which he told Variety, “I don’t remember what I said. I was trying to keep her at ease.”

Comedian-actor Bill Murray cannot get over his co-star Selena Gomez. The two were recently seen together at Cannes 2019 red carpet as they held hands and posed for photos at the premiere of their film ‘The Dead Don't Die’.

The film had its world premiere as the opening night film of the event.

After their scintillating appearance at Cannes, Bill was asked as to what he whispered in her ear, to which he told Variety, “I don’t remember what I said. I was trying to keep her at ease.”

“I really like her,” he continued. “I mean, you still can’t tell me who the hell Selena Gomez is — but Gomez I really like. She’s unusually bright. She’s kind and she’s natural. I’m always pleased to find some kind of pop icon who I really like.”

Bill then went on to compare her affability to another pop star he’s previously worked with on Sofia Coppola’s Christmas special A Very Murray Christmas. He said, “Like Miley Cyrus, I dig that chick.”

He added, “They’re really their own people. They have enormous followings, and they are sort of singing their own songs. Which is cool.”

He further said, “He said she is very wonderful talking to young girls about how you don’t have to be skinny — you can eat whatever you want. She doesn’t worry about her figure or anything. She’s not in the gym. She doesn’t have a trainer. She’s not vain in that way. And I thought, ‘That’s really attractive — to see someone who’s not vain about their body.'”