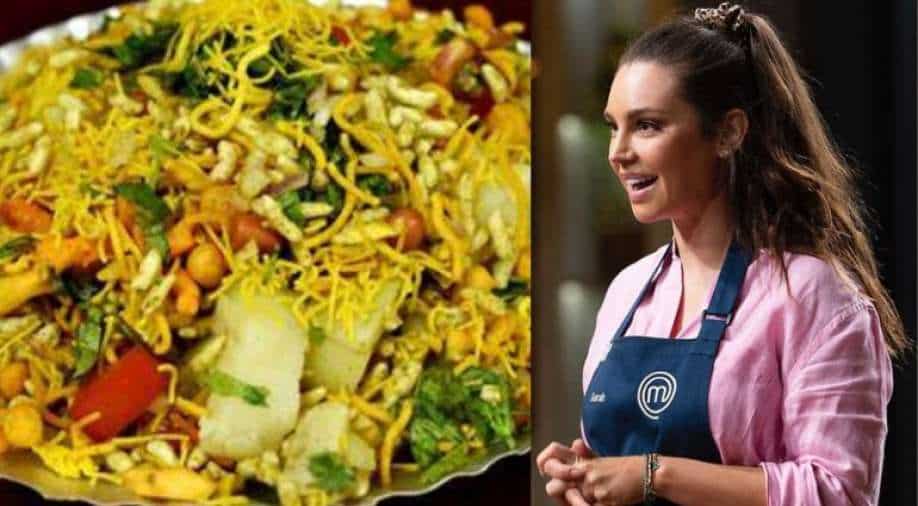 Sarah Todd is a renowned celebrity chef in Australia.

Every Indian has a soft corner for a spicy, tangy Bhel Puri. The staple and favourite snack of every Indian, undoubtedly. It's an easy peasy dish that saves a lot of time and put your cravings to rest! But, did you know that our street food has become the Masterchef level dish, yeah it is, Australian Masterchef judges loved it and get confused over the complex flavours.

The Bhel Puri become the talk of the desi Twitterati after one of the Masterchef Australia contestant Sarah Todd made that snack on the show. Yes, she made a very common Indian dish and judges were shocked with the dish that has a lot of flavours.

Sarah, who is an Indian Australian and a celebrity chef, is back in this 16th season of the show to blow the minds of judges with some Indian delicacies. Taking to her Instagram, she shared her whole story. Sharing the photos of her from the show, she shared in the caption of the post how Judges asked her to make the tasty dish in 10 minutes and the first thing that popped in her mind was Bhel Puri, obviously.

''It is said that a true blue Bhel Puri must be created just before consumption to prevent the puffed rice from getting soggy. And all we have to do is let the taste takes its course. Perfect for the MasterChef 10-minute challenge, right? Zingy, tangy and slightly spicy! #MasterChef #Masterchefau #recipes #recipe #sarahtodd''. The second-best dish, great outcome but not great enough to keep me out of round 2! Oh and hugs from my two faves, faves!''

While we all knew how easily the Bhel Puri can be prepared, but it was a complex dish for the judges and Australians too.

After Sarah shared her story, the desi internet went made over the judge's reactions and seeing Bhel Puri in Masterchef. Some made fun of the preparation time, saying in Indian Bail Puri seller will prepare it in 1 minute, while others said that they are having Masterchef level dish every evening at just Rs.20.

Check out all the reactions here:

So basically we are having a masterchef level dish every evening at just Rs.20 😂 https://t.co/rzgRjwQaKQ

Someone made Bhel Puri in Masterchef Australia and the judges were like—
‘You packed such complex flavours into this and the raw onions were amazing and how did you manage to do this in 10 minutes!!!’ 😂😂😂

i will always laugh at panta bhaat being made at the finale or something of the show 😭Its literally the last resort means to make sure that leftover rice doesn’t go to waste at home https://t.co/7yKAU97vlG

So basically we are having a masterchef level dish every evening at just Rs.20 😂 https://t.co/rzgRjwQaKQ

They literally go Gaga over most basic ass Indian recipes.

Meanwhile, for the unversed, Sarah is a renowned celebrity chef in Australia. She become well known after she made it to the top 10 in MasterChef
Australia season 6. As a contestant back then, she blew the mind with her little experiments with Indian cuisine. Todd is an author and an entrepreneur as well and enjoys a massive fan following around the world.  She has two restaurants in India, one in Goa and another in Mumbai.