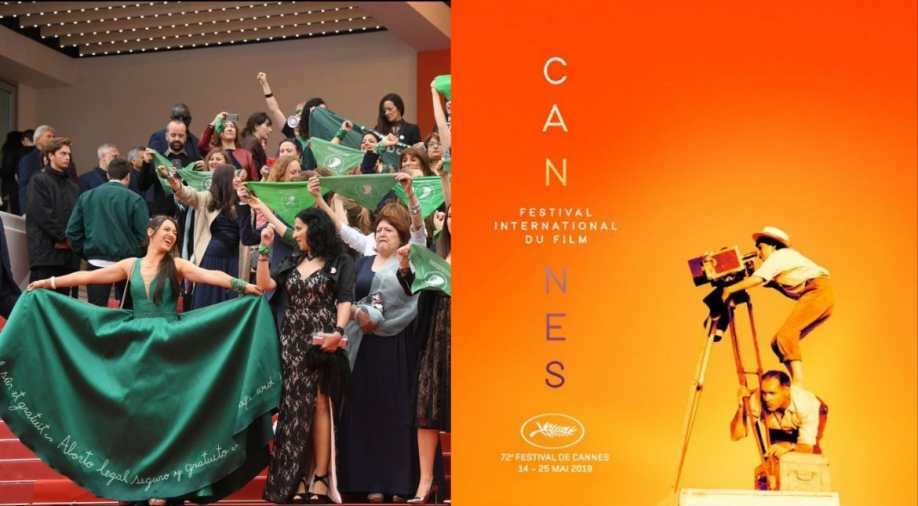 The protest is behind the rejection of law in Argentina legalising abortion.

Dozens of pro-choice women campaigners and staged demonstrations at the Cannes Red Carpet ahead of the premiere of Argentine director Juan Solanas` abortion documentary `Le It Be Law` (Que Sea Ley).

According to The Hollywood Reporter, the demonstrators from Argentina unfurled green signs and flags.

Green is the signature colour of the pro-choice movement in Argentina.

The protest is behind the rejection of law in Argentina legalizing abortion.

The law was rejected last year, but will up for a vote again on May 28.

The political debate in the country mirrors the one in the US, which is gearing up for a fresh round of debate as several states take measures to clamp down on abortion, including Alabama where the governor signed a bill on Wednesday to ban nearly all abortions, even in the cases related to rape and incest.

But according to organizers, the protest is also a reaction to changes in US abortion law.

So far this year, four states - Georgia, Kentucky, Ohio, and Mississippi- have enacted bans on abortions after a fetal heartbeat was detected.

Earlier on Friday, the Missouri House passed a bill banning abortions after eight weeks, except in few cases pertaining to a medical emergency.

The state's Republican governor, Mike Parson, is expected to sign the measure soon.

"In the US what is happening now is part of a kind of global reaction to women's rights," Solanas told THR.

"I feel like little by little we are moving towards equality between men and women, and this is a pushback, a last reaction."

"The movie started with the desire to help in a teeny tiny, small way to make it happen, so having the film here, which is the most covered and talked about event in the world that's not bad for a movie. It's already had a huge impact in Argentina. Thanks to Cannes, we have put the abortion topic right on the top of the news again," he said.

"For me, there is nothing more powerful than the truth," Solanas added of the movie's stark style, which features several women telling their stories straight to camera.

''My hope is that the international attention will spread the message of the movie."

This year has seen directors unfurl banners on the red carpet, with Litigante director Franco Lolli protesting the assassination of Colombian filmmaker Mauricio Lezama and For Sama co-directors Edward Watts and Waad Al-Kateb condemning the Syrian regime's attacks on hospitals.