Konversations: This self-taught farmer wants to change how we eat 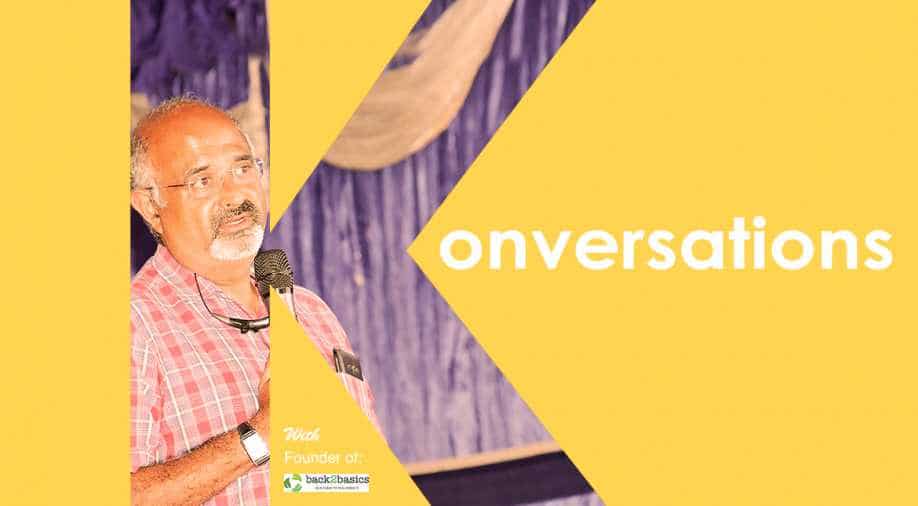 'Growing food is certainly just as fulfilling as creating art and just as therapeutic' Photograph:( WION )

Usually, in the race of life and in the middle of all the chaos, one ignores small things. Things like where your last meal was grown and how it could be contaminating your system. S Madhusudhan, a marketing veteran, stopped to re-evaluate his own fast-paced lifestyle and food habits after a health scare. His findings not only turned him into an organic farmer but also gave birth to Back2Basics, a venture that is now distributing fresh farm produce to several parts of the world.

Kazimi: You often talk of organic farming as an art. How does growing food resemble art?

Madhusudhan: Growing food is certainly just as fulfilling as creating art and just as therapeutic.

Kazimi:  What are your eating habits?

Madhusudhan: I believe in the healthy way of living and I am a consumer of my own produce. I am a strict vegetarian and avoid foods that are either too sweet or too spicy. I am also a teetotaller and avoid cold drinks as well due to their high sugar content.

Kazimi: What motivated you to start the venture?

Madhusudhan: Following a brief yet serious health scare, I was compelled to take a break from my busy life to evaluate how it had started affecting my health. During my recovery, my doctor had suggested that I indulge in gardening, which also happened to be one of my favorite hobbies. I subsequently decided to turn my passion for gardening into something more, and began researching on organic farming and various agricultural practices.

Kazimi: What were your findings?

Madhusudhan: After nearly four years of research on the organic farming segment and meticulous market research, I found that almost 90% consumers had no idea about the source of their produce. They usually bought fruits and vegetables which looked farm-fresh, and considered the quality of products to be secondary. Consequently, this lack of awareness has led to many long-term health issues for individuals, as they indirectly ingest harmful chemicals through these products. Inspired by this study, I wanted consumers from all walks of life to buy chemical-free, farm fresh produce that is delivered to their homes as soon as they are harvested. That is when the idea of my company came into being.

Kazimi:  What do you enjoy as an entrepreneur?

Madhusudhan: My favorite part about being an entrepreneur is the simple fact that every day is a new adventure and a new challenge – it is truly an exhilarating feeling, as each new day brings with it a new learning experience.

Madhusudhan: The biggest challenge faced by me was when I had just started out. I was attempting to set up a farm without any background in agriculture. However, following years of research and self-study, I was finally prepared to build my business further, and have not looked back since.

Kazimi:  How is it to work with your daughter?

Madhusudhan: My daughter Bhairavi was initially skeptical of joining me as she had no prior experience in organic farming. However, after observing every aspect of this business and inspired by my work, she decided to utilize her industry experience within the company and started investing her expertise to help this business grow. She has played a key role in making the venture gain more financial stability by developing a special algorithm to change the pricing structure. This helped increase the company’s profits by 54 percent within 16 days.

Kazimi: How big is your team?

Madhusudhan: We are like one big family. Each person regardless of their job function is an important member. We employ over 450 laborers in our farms and manage a small but dedicated corporate team.

Madhusudhan: Quite literally, an experiential farming process invites people to visit its farms and witness high-quality organic production for themselves. Through its contemporary farming practice, we hope to establish a dialogue about the ‘organic’ way of living. Furthermore, it hopes to promote a healthier lifestyle by educating consumers and their families on the benefits of organic farm fresh produce. We love how people enjoy to pluck produce from the farms and eat it there itself.

Kazimi: What do you do with the produce unused?

Madhusudhan: We try to produce only what is ordered. But in cases when the produce does not match a certain quality standard, it is sent to liquidation channels that develop it as natural compost and are further utilized in the farming soil to generate more value.

Kazimi:  You are based out of India, a country where 70% of the population indulges in agriculture. What would you say are some loopholes in the industry?

Madhusudhan: While the organic farming industry in India has witnessed significant growth over the years, it still remains at a nascent stage. Many agronomists still doubt the sustainability of growth and the future of this sector mostly due to lack of awareness, and consequent lack of branding and promotion for higher realization. Furthermore, while certain efforts have been taken by the central government to create more awareness about organic farming in India, the state government should also announce some subsidies that can benefit both farmers and the organic farming industry in the long run.

Kazimi: Can we feed the entire world with organic food?

Madhusudhan: While it certainly sounds like an ambitious initiative, attempting to feed the entire world with organic food can take years to be put into effect, if it ever happens. In theory, it can be said that promoting organic farming can certainly fill some gaps within the conventional agricultural space, which usually witnesses production of chemical laden high-yield crops. With more land dedicated to organic farming, people all over the world will certainly have more access to organic produce. However, for now, the focus should be on developing this segment further by introducing comprehensive technology and better infrastructure that can sustain its growth in the future.

Kazimi:  How do you unwind?

Madhusudhan: When I do get some free time, I enjoy spending it with my family and our pets (we have 3 dogs, 4 cats and 35 birds). I also enjoy traveling and indulging in extreme sports.