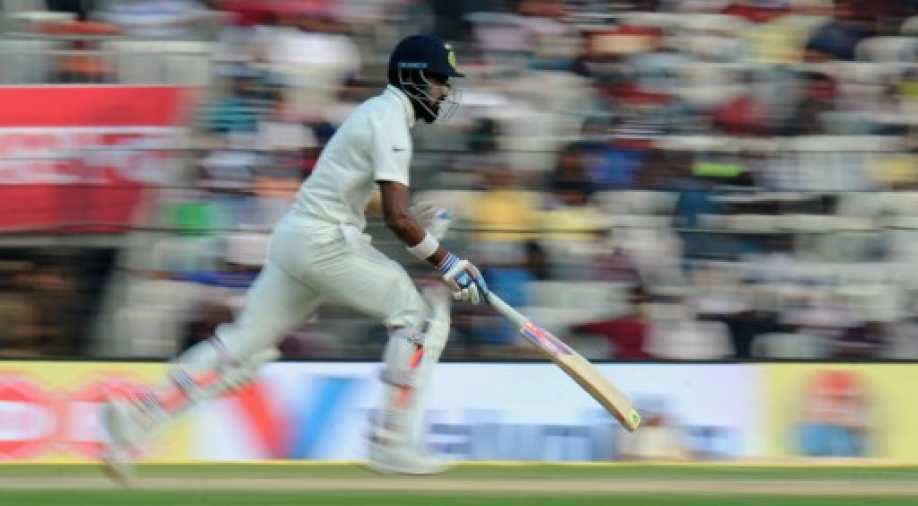 KL Rahul hit sixteen boundaries and three over the fence but was an agonising run short of his maiden Test double century. Photograph:( AFP )

Opener Lokesh Rahul hit a career-best 199 to power India's strong reply as England bowlers struggled on day three of the fifth and final Test in Chennai on Sunday.

Rahul shared a 161-run fourth-wicket partnership with Nair before missing out on what could have been his maiden double century.

Rahul, who recorded his fourth Test century, was the ninth batsman in the world to get out on 199 after falling to leg-spinner Adil Rashid in the final moments of the day.

The 24-year-old batsman chased Rashid's widish delivery on the off-side to give away a catch to point as he crumpled into a heap with hands on head.

Earlier Rahul had surpassed his previous best of 158 as he entertained a raucous Sunday crowd with a couple of reverse sweeps.

He struck 16 fours and 3 sixes during his marathon knock, prompting England skipper Alastair Cook to rotate his bowling options.

The tourists took the second new ball in the 85th over of the innings but Rahul and Nair made sure that India continued to mount the runs.

Nair recorded his maiden Test fifty in just his third match to play the perfect sheet anchor role as Rahul piloted the Indian innings till his departure.

It was the first time in the series that Kohli, who leads the batting chart with 655 runs, had been out for less than 40. He chipped a drive to extra cover off Stuart Broad.

Overnight batsmen Parthiv Patel and Rahul made England`s bowlers toil earlier in the day with a 152-run opening stand, before Moeen Ali's off-spin prised out Patel -- the only wicket of the morning session.

It was India's first century opening partnership in 32 innings even though wicketkeeper Patel was filling in for regular opener Vijay, who got treated for a bruised shoulder before coming into bat.

Patel (71) was undone when he played against the spin of a flighted and sharply turning delivery from Ali to spoon a simple catch to Jos Buttler at cover.

India hold an unassailable 3-0 lead in the five-Test series.