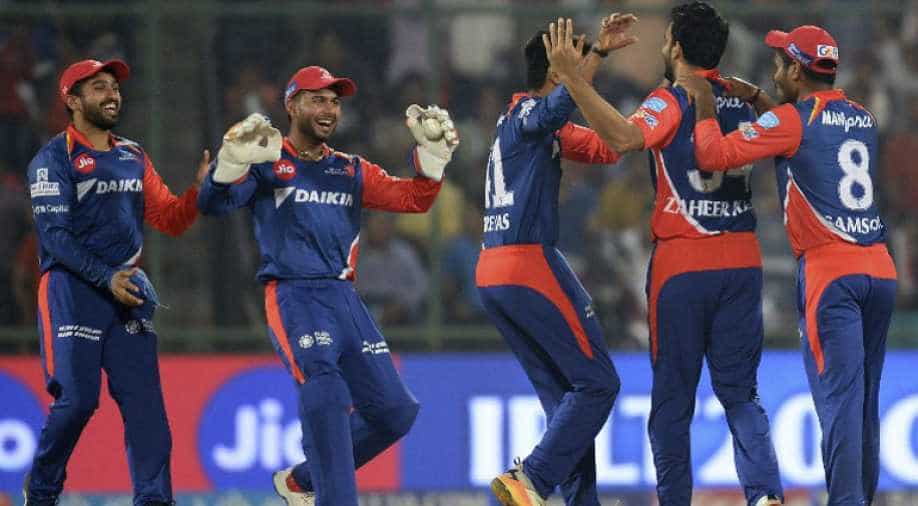 Pune, who came into the match winning seven out of their last eight matches, could only reach 161 for seven in reply to Delhi Daredevils' 168 for eight after the hosts surprisingly decided to bat first at the Feroz Shah Kotla.

Karun Nair starred with the bat for Delhi with 64 off 45 balls while a fighting 60 off 45 balls from Manoj Tiwary did not prove to be enough for Pune.

Needing an improbable 25 off the last over, Tiwary made things interesting with sixes off the first two balls before being bowled by Pat Cummins.

With the loss, Pune remain third in the points table and will have a must win tie against Kings XI Punjab on Sunday.

Pune made a decent start to the chase despite losing their openers Ajnkya Rahane (0) and Rahul Tripathi (7) cheaply. Both were dismissed by Zaheer Khan, who turned back the clock with a delightful spell of swing bowling.

He bowled a beautiful inswinger the first ball of the innings, ripping through the defense of Rahane. A little later Tripathi could not execute a cut properly to be caught behind.

Pune captain Steven Smith (38 off 32)) then took charge of the proceedings with Tiwary at the other end. Smith punished Shahbaz Nadeem from the word go, smashing him for couple of fours and a six.

The duo was scoring at a brisk pace, taking Pune to 74 for two in nine overs. However, Smith was trapped in front of the stumps by Nadeem on the first ball after the break to spice up the contest.

Pune were left to score 77 runs off the last 48 balls with Ben Stokes and Tiwary in the middle. It did not turn out to be a straightforward chase despite Delhi's sloppiness on the field. Tiwary was dropped twice but still was not able to take his side home.

Earlier, Karun Nair struck his first half century of the season to help Daredevils set up a competitive total.

Nair (64 off 45) and Rishabh Pant (36 off 22) set the platform for Delhi before regular fall of wickets pushed them back.

Delhi, going against the trend, chose to bat after picking a side comprising eight Indians and three foreigners, becoming the second team to do so this season after Gujarat Lions.

However, it was another wobbly start for Delhi, who lost Sanju Samson and last match's hero Shreyas Iyer to be two for nine in the third over. Samson was out to a brilliant direct hit by Ben Stokes while Iyer tried to slash a back of length ball off Jaydev Unadkat only to edge it back to M S Dhoni.

Nair and Pant then got together and took the attack to the opposition. No boundaries were scored in the first three overs but they made up for that by smashing five fours and six in the next three.

Offie Washington Sundar was taken to the cleaners in his first over with Nair collecting two fours on the leg side before Pant hit a flat six over mid-wicket to get going.

Similar treatment was meted out to Pune's star all- rounder Stokes, who went for 13 in his opening over, courtesy three crisp hits from Nair.

Pant was not to be kept quiet at the other end and his stand out shot was the massive six over mid-wicket that almost landed on the dressing room balcony. Trying for another big one, Pant departed the next ball after being caught at long on off Adam Zampa, leaving Delhi at 83 for three in nine overs.

Marlon Samuels (27 of 21) supported Nair for a while with the highlight of his innings being the two consecutive sixes off pacer Shardul Thakur, who ended up leaking 35 runs in three overs.

Just when Delhi seemed set for a big score, Dhoni swung the momentum in Pune's favour with some outstanding glove work. Showing he was still one of the best in the business, Dhoni sent back Samuels with a one-hand catch on the jump before dismantling the stumps in a jiffy to remove Corey Anderson.

Nair had gone quiet while wickets well at the other end.

He got to first half century of the IPL with a single.

Pune bowlers did well to contain Delhi towards the end and were complemented well by the fielders. One such example was when Stokes showed great presence of mind at the deep midwicket boundary to complete the catch on his second attempt to dismiss Mohammed Shami.