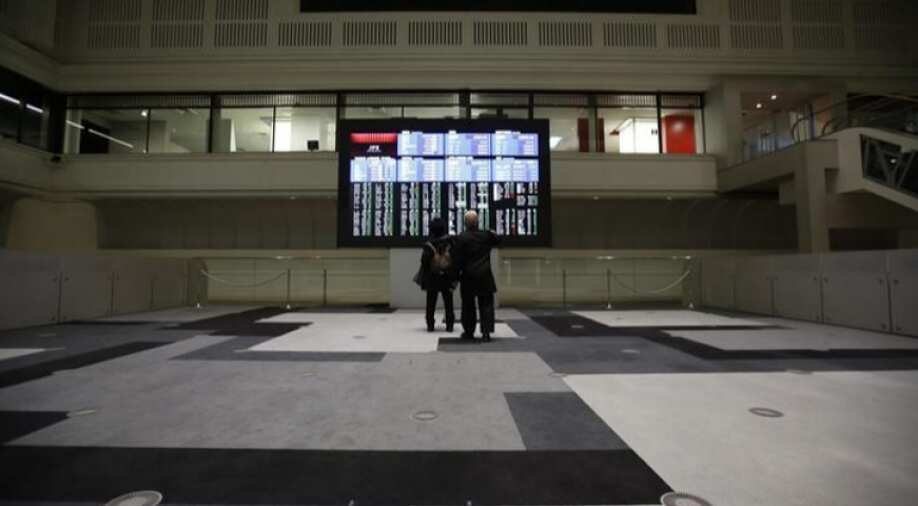 The euro slightly extended its gains to trade at $1.1905. Photograph:(Reuters)
Follow Us

MSCI's broadest index of Asia-Pacific shares outside Japan fell 0.51% to its lowest level since mid-June while Japan's Nikkei tumbled 1.91%.

Global stocks took another beating on Friday while investors piled on to safe-haven assets after US President Donald Trump said he would slap a 10% tariff on the remaining $300 billion of Chinese imports from next month.

MSCI's broadest index of Asia-Pacific shares outside Japan fell 0.51% to its lowest level since mid-June while Japan's Nikkei tumbled 1.91%.

Trump's move breaks a truce in the trade war struck in June and could further disrupt global supply chains.

"After US-China summit meeting, people had expected there would be a lull for quite some time," said Masahiro Ichikawa, senior strategist at Sumitomo Mitsui DS Asset Management.

"And the market was also relieved by signs of recovery in the semiconductor sector. But now investors and companies will have to revise their such scenarios."

China's state media quickly denounced the move, with the editor in chief of the Global Times saying on Friday that a trade deal between the United States and China was now "further away."

The proposed levies triggered a stampede for safe-haven assets, including US bonds, the yen and gold while the yuan and the Australian dollar hit multi-month lows.

The yen edged up to 107.25 on the dollar after rising 1.3% overnight, its biggest daily gain in more than two years.

In contrast, the risk sensitive Australian dollar dropped to a seven-month low of $0.6795 while the offshore yuan hit a nine-month low of 6.9731 to the dollar.

The 10-year US bond yield fell almost 12 basis points on Thursday to 1.902 per cent, hitting the lowest level since November 8, 2016, when Trump won a surprise victory in the presidential election.

Trump's decision has thrown the Federal Reserve another curve ball that may force it to again cut interest rates to protect the US economy from trade-policy risks after its first rate cut in more than a decade on Wednesday.

Although Fed Chairman Jerome Powell said the rate cut was a "mid-cycle adjustment" and not a start to a full-blown rate-cutting cycle, markets aren't fully convinced.

The October Fed funds rate futures have jumped to now fully price in a rate cut in September, compared with only around 60% before the tariff announcement. Another 25 basis point move is priced in by December.

"In the grand scheme of things, it will become clearer and clearer that the Federal Reserve has started an easing cycle and will have no choice but to cut rates further," said Akira Takei, fund manager at Asset Management One.

The new tariffs would hit a wide swathe of consumer goods from cell phones and laptop computers to toys and footwear, at a time when the manufacturing sector is already reeling from the accumulative impact of the trade war.

The US Institute for Supply Management said on Thursday its index of national factory activity fell to 51.2 last month, the lowest reading since August 2016. That came on the heels of surveys in Europe and Asia showing factories under the pump, with manufacturing activity in many countries shrinking in the face of intensifying trade frictions.

Oil prices bounced back a tad after suffering sharp falls the previous day.