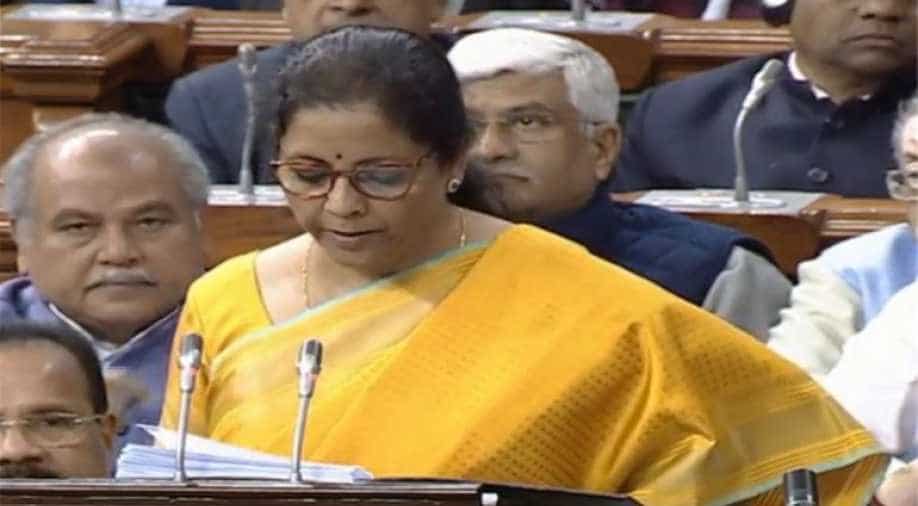 Nirmala Sitharaman presented the Budget for the second time in her tenure on Saturday.

Union finance minister Nirmala Sitharaman presented the Budget for the second time in her tenure on Saturday.

* Corporate tax for existing companies slashed to 22 per cent.

* Rs 99,300 crore allocated for the education sector and Rs 3,000 crore for skill development.

* Steps to be taken to attract external commercial borrowing, FDI in the education sector.

* Rs 4,400 crore allocated for the 'Clean Air policy'. In this, the focus will be on those cities that have a population of one million.

* India's commitment towards tackling climate change made in Paris conference kick-starts from January 1, 2021.

* PM KUSUM to be expanded to provide 2 million farmers in setting up standalone solar pumps.

* Sitharaman allocated Rs 2,955 crores to the Ministry of Environment, Forests and Climate Change which was roughly 10 per cent more than the previous Budgets.

* Out of this, pollution control got a fresh budget of Rs 460 crores, which includes multiple initiatives like the National Clean Air Programme (NCAP).

* India to provide 273 billion rupees for promotion of industry and commerce.

* India to allocate 44 billion rupees for clean air incentives in cities with over 1 million people.

* India to allocate 220 billion rupees for power and renewables.

* Conventional energy meters to be replaced by prepaid smart meters in the next three years.

* Large solar power capacity to be set up alongside rail tracks, on land owned by Indian Railways.

* 550 wi-fi facilities have been commissioned at railway stations.

* Proposal for setting up large solar power capacity alongside rail track is under consideration.

* 1,150 trains to be run in PPP mode, also 4 stations to be redeveloped with help of the private sector.

* Government to consider corporatisation of at least one major port and listing it on stock exchanges.

* The government to disburse Rs 15 lakh crore among farmers as credit for the year 2020-21.

* Refinancing scheme of National Bank for Agriculture and Rural Development (NABARD) will be further expanded.

* Special bridge courses will be designed for teachers, nurses, para-medical staff and caregivers.

* Proposal to attach medical colleges with district hospitals on the Public-Private Partnership.