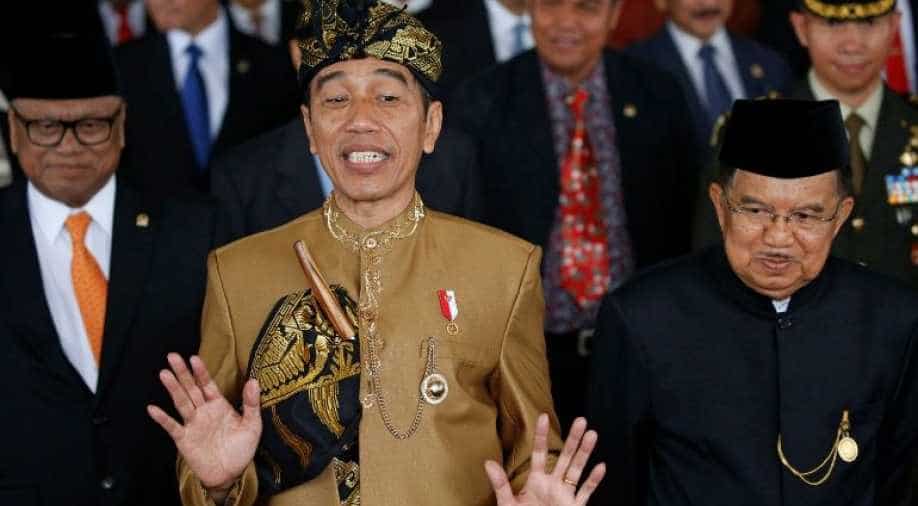 Indonesia's President Joko Widodo and Vice President Jusuf Kalla react to reporters after the president addressed them ahead of Independence Day at the parliament building in Jakarta, Indonesia. Photograph:( Reuters )

The proposed budget is 3 per cent bigger than 2019's plans, but about 8 per cent larger than the latest government estimate of what Jakarta will spend this year.

Indonesian President Joko Widodo on Friday proposed a 2,528.8 trillion rupiah ($177.56 billion) budget to parliament for 2020, focusing spending on human resources, which was central in his re-election campaign.

The 2020 budget proposals set a target of 5.3 per cent growth in the gross domestic product (GDP), the same as this year's, although officials have often said 2019 growth would probably range from 5.1 per cent to 5.2 per cent.

The proposed budget is 3 per cent bigger than 2019's plans, but about 8 per cent larger than the latest government estimate of what Jakarta will spend this year.

It will fund the president's programmes in the first year of his second five-year term, which officially begins in October.

"The 2020 state budget policy is designed to be expansive, but to remain targeted and measured," Widodo told parliament.

To fund his budget, Widodo proposed to set a target of 2,221.5 trillion rupiahs of state revenue. That brings the fiscal deficit in his budget proposals to 1.76 per cent of GDP, which he said gave room to anticipate global uncertainties.

Juniman, the chief economist of Maybank Indonesia, said Widodo's GDP growth assumption, which is used as the basis of the government's tax revenue target, is unattainable.

"I'm pessimistic the 5.3 per cent growth can be achieved. Given the gloomy global condition and its slowdown trend this year and next, it will be hard for any emerging market to grow faster than this year," said Juniman, who uses one name, like many Indonesians.

While Widodo promised to keep building infrastructure in 2020, the budget's main theme was improving human resources, with the president pledging to "answer to our demographic challenges".

Earlier on Friday, Widodo told parliament raising the quality of the labour market in his second term was key to reaping the benefit of a demographic dividend - a time when the number of people of working age exceeds those of non-working-age.

The government proposed to spend 505.8 trillion rupiah ($35.51 billion) for education in 2020, up 30 per cent from this year, to improve basic education as well as provide financing for 818,000 students to go to universities, Widodo said.

It would also use the budget to provide training for what Widodo called "emerging skills", such as coding, data analytics, graphic design and even training to become a coffee barista.

The budget proposals also assumed an inflation rate of 3.1 per cent, a yearly average rupiah exchange rate of 14,400 to the dollar, a 5.4 per cent average rate for 3-month Treasury bills and an average crude oil price of $65 a barrel, Widodo said.