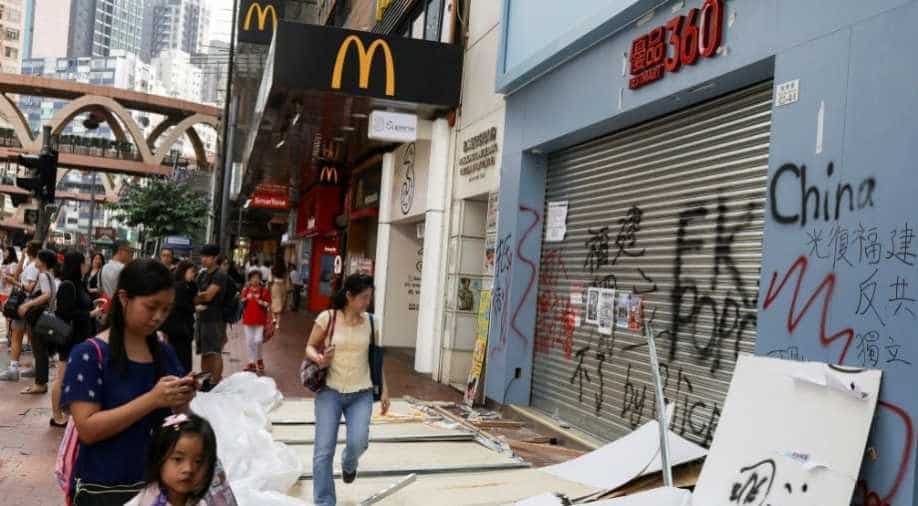 Five months of protests have battered the Chinese-ruled city's retail and tourism sector, and there is no sign of the demonstrations abating.

Hong Kong slid into recession for the first time in a decade in the third quarter, weighed down by increasingly violent anti-government protests and the protracted US-China trade war.

Five months of protests have battered the Chinese-ruled city's retail and tourism sector, and there is no sign of the demonstrations abating. Police tightened security on Thursday ahead of more potential clashes.

The city's economy shrank 3.2% in July-September from the preceding period, contracting for a second straight quarter and meeting the technical definition of a recession, according to preliminary government data on Thursday.

From a year earlier, gross domestic product (GDP) contracted 2.9%. The readings were the weakest for the Asian financial hub since the global financial crisis in 2008/2009.

"Domestic demand worsened significantly," the government said in a statement.

"As the weakening economic conditions dampened consumer sentiment and large-scale demonstrations cause severe disruptions to the retail, catering and other consumer-related sectors, private consumption expenditure recorded its first year-on-year decline in more than 10 years."

The government said that with no sign of protests abating, private consumption and investment sentiment would continue to be affected.

Some Hong Kong businesses have asked employees to take unpaid leave as tourists steer clear of sometimes violent running battles between protesters and police in key shopping areas and malls.

Capital Economics said in a research note that while GDP would probably continue to contract in the fourth quarter, the pace of contraction should ease barring a further escalation in the demonstrations.

"Any recovery will be constrained by weak business investment, however, as the city’s political crisis has done lasting damage to its reputation as a stable and autonomous financial hub," it said in a note to clients.

The protests and escalating violence have plunged the former British colony into its biggest political crisis in decades and unnerved many in the business and financial communities.

Protesters are angry at what they see as Beijing’s increasing interference in the Chinese-ruled city. China denies meddling and has accused foreign governments, including the United States and Britain, of stirring up trouble.

The city's leader Carrie Lam warned on Tuesday that full-year growth could contract.

Almost all growth engines in the Asian financial hub stalled over the summer as shops shut to avoid clashes between riot police and protesters, while the Sino-US trade war intensified. Hong Kong is one of the world's most popular tourism destinations and a bustling container port.

Retail sales fell the most on record year-on-year in August, while tourist arrivals dropped the most since Severe Acute Respiratory Syndrome (SARS) struck Hong Kong in 2003.

Last week, the government announced relief measures of HK$2 billion (£197 million) to support the economy, particularly in its transport, tourism and retail industries, and more is expected. It has also urged landlords to cut rents for struggling businesses.

But there is no guarantee Beijing will come to Hong Kong's rescue as it has done during previous downturns, at times relaxing mainland visitor restrictions to boost tourism.

"There is no liquidity bail-out for Hong Kong, ever. This is it. It's not coming back," said Andy Xie, a Shanghai-based independent economist formerly at Morgan Stanley.