Explained: What causes sudden fires in Electric vehicles and how it can be prevented 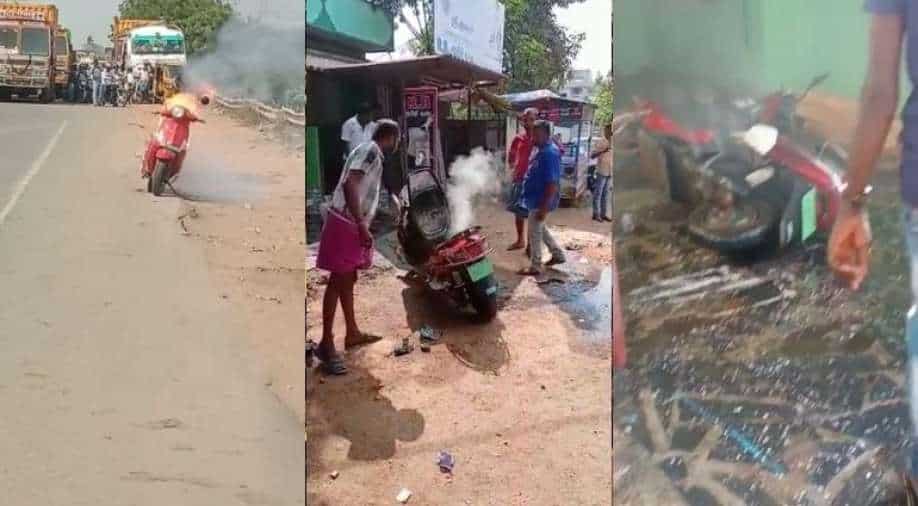 According to experts, there are hardly 30-60seconds for a rider to escape, once an Electric vehicle battery starts emitting smoke. Photograph:( Twitter )

Four Electric Vehicles(EVs) emitted smoke and eventually went up in flames over the last four days in India, thus raising alarm over the safety of these E-scooters.

While one incident was reported from Maharashtra, the other three were from Tamil Nadu. Happening at a time when the summer is just beginning to set in across the subcontinent and at a time when people are actively considering switching to Electric vehicles, these events have sparked widespread concerns.

To understand the issues that might have led to the recent fires and to know about possible solutions, WION spoke to Aravind Kumar Chandiran, Assistant Professor, Dept of Chemical Engineering, IIT-Madras.

In this incident from Trichy, E-bike was parked overnight in a shop, next morning as it was taken out & parked it emitted fumes pic.twitter.com/ucF1Xbsnbc

According to him, such issues of batteries emitting smoke and eventually catching fire are not sudden phenomenon.

These are actually the result of a build-up(in the battery) that happens over a considerable period of time.

BMS is designed to monitor the parameters(temperature, charging, discharging) associated with the battery pack and its individual cells, apply the collected data to eliminate safety risks and optimize the battery performance.

Incident from #Chennai outskirts.. Person was riding his #ElectricVehicle to work, when it started emitting smoke... he parked by the highway only to see flames erupt from the battery section.. Water tanker passing by put out the blaze pic.twitter.com/8XBkB2ODru

"Electric vehicles operate in climactic conditions that prevail across India, which includes very cold to hot and humid weather and the battery is required to function across these places. Likewise, there are many users who ride the EV for a few hours every day and for long hauls, whereas others who use it casually, for short rides. There are also differences in charging patterns that the users follow. The algorithms in the BMS, must be extensively tested for these dynamically varying conditions, to facilitate best and safe performance of the batteries" he elaborated. Given that EV are in the initial stages of adoption in India, Aravind Kumar is of the opinion that it is the complete responsibility of the Original Equipment Manufacturers and EV companies to deliver well- tested vehicles, that are suited for Indian conditions and users. However, he also feels that batteries emitting smoke and catching fire/exploding are part of an evolutionary process that was witnessed even in mobile phone batteries, and was eventually perfected.

Speaking about the major factors behind damage caused to electric vehicle batteries, he said that it could be thermal abuse(high or low temperature variations), mechanical abuse(accident or crash) and also electric abuse(overcharging and deep discharging cycles). He added that their lab at IIT Madras was also conducting controlled explosions in batteries by inducing the above abuses, to better understand what specific factors lead to the smoke and fire. "By identifying these symptoms or any minute details and changes that we observe in the batteries under abuse, we will be able to detect the issues before hand and develop sensors or alerts to inform the rider. Once a battery starts emitting smoke, there is only about 30-60seconds for escape and that time is very crucial for the rider" he added.

Incident from Vellore, where an #electricbike put on charge overnight is said to have erupted in flames and caused damaged to the house.. resultant smoke, asphyxia and blaze said to have killed father and daughter.. apparently, this was a one week old bike #ElectricVehicles pic.twitter.com/qu6XcMcKKW

In terms of developing such mechanisms to detect battery failure, he said that mobiles have finally evolved to a stage where they can warn of overheating, when completely charged, when battery is losing efficiency etc. Likewise, he believes that further research and studies into EV batteries can evolve a triple redundant mechanism to avoid such mishaps. "As more data is available on the EV batteries and their functioning, we can have the BMS and sensors to alert the rider in case of battery danger. With targeted measures, we could even save the battery from further damage and even prevent damage to the vehicle" he adds.

When comparing EV scooters and cars/trucks, scooters are more prone to such battery issues, as scooters lack the liquid cooling technology, which is found in larger vehicles. Despite the higher standards, even the major global automobile and electric vehicle brands have suffered cases of explosion in their models of Electric cars. It is notable that while mobile phone batteries store approximately 10 Watt hours of energy, electric vehicles store few Kilowatt hour to tens of Kilo Watt hours of energy, which is exponentially higher and thus making the complications of heating, thermal management, etc very high. As a researcher in the field, Aravind feels that such setbacks and mishaps are part of the evolution of the technology, and it would eventually lead to better solutions and safety systems being built into EVs.