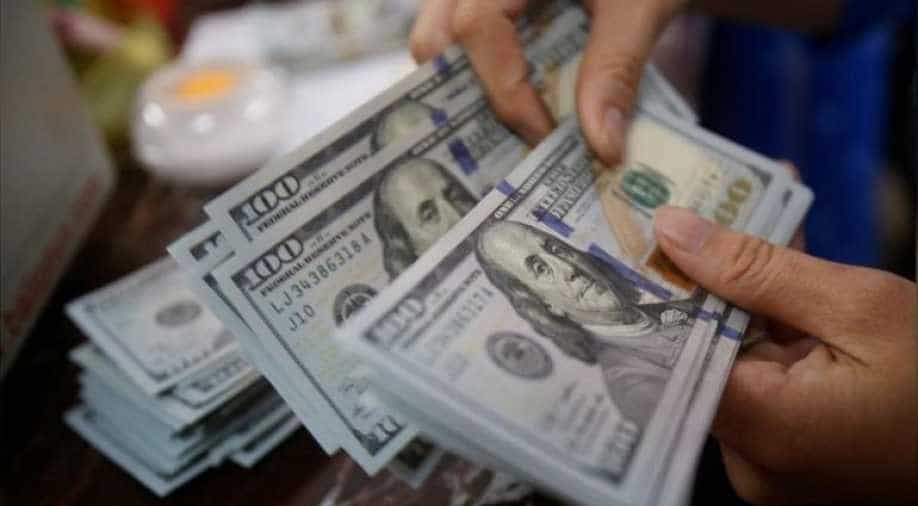 File photo: An employee of a bank counts US dollar notes at a branch in Hanoi, Vietnam May 16, 2016. Photograph:( Reuters )

The safe-haven dollar and yen fell on Wednesday as risk sentiment improved after global political worries eased with what markets perceived as positive news in Hong Kong, Italy and Britain.

The dollar index slid for a second straight session, while the yen, which draws safe-haven bids in times of geopolitical stress, dropped for the first time in four days against the greenback.

In Italy, the 5-Star Movement approved a coalition deal with the Democratic Party, paving the way for a new government, while lawmakers opposed to a no-deal Brexit gained the upper hand in Britain, triggering a global equities rally.

Edward Moya, senior market analyst at OANDA in New York, said the dollar's weakness was triggered by this "risk-on move in Hong Kong that gave Hong Kong equities one of the best moves in a few years." That has boosted appetite for riskier currencies that have generally higher yields, he added.

"Everyone has been waiting for this major dollar reversal for quite some time. It has never come to fruition," Moya said. "This is providing a little bit of unwinding of some dollar bullish positions."

In mid-morning trading, the dollar was last down 0.4 per cent against a basket of major currencies, at 98.656.

The euro also rose 0.4 per cent versus the dollar to $1.1011 after comments from Christine Lagarde, who will likely be the European Central Bank's next president, introduced some doubt over the scale of an ECB stimulus package expected next week.

Lagarde said highly accommodative monetary policy for a prolonged period was necessary but she added that the bank needed to be mindful of the negative side-effects of such tools.

Expectations for an interest cut, the relaunch of asset purchases and other ECB measures to stimulate the economy have weighed on the euro. On Tuesday, it hit a 28-month low around $1.0924.

The dollar's weakness helped China's offshore yuan pull away further from record lows plumbed earlier this week. The Chinese currency was last up 0.4 per cent against the dollar, which fell to 7.1511 yuan.

The British pound recovered Tuesday's losses, when it hit a three-year low, after the latest parliamentary attempt to stop a no-deal Brexit took a step forward.

Lawmakers who defeated Prime Minister Boris Johnson's government on a crucial motion late on Tuesday are expected to introduce a bill in parliament seeking to stop Britain from leaving the European Union on Oct. 31 without transitional arrangements.