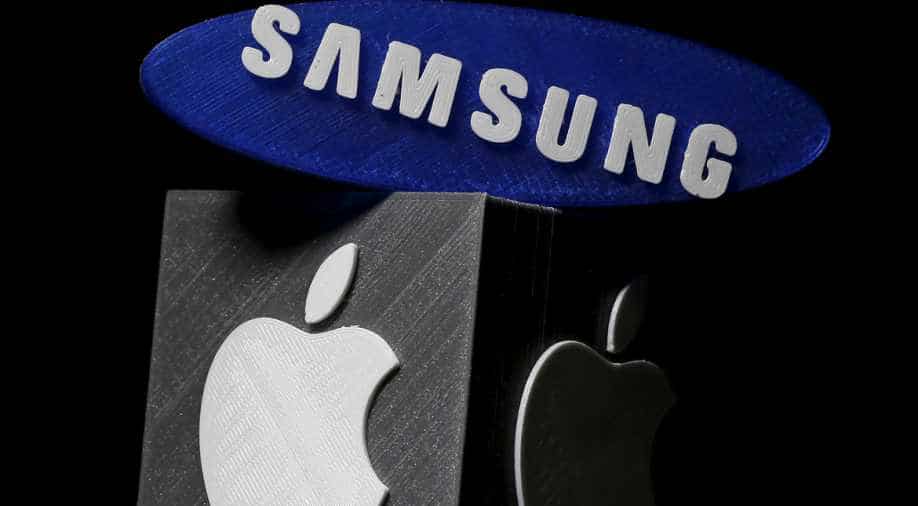 Apple spokesman Josh Rosenstock said in a statement that the US company remained 'optimistic that the lower courts will again send a powerful signal that stealing isn't right.' Photograph:( Reuters )

The US jury on Thursday directed Samsung to pay US $539 million to Apple Inc for copying patented smartphone designs and features, bringing a years-long feud between the technology companies into its final stages.

The award appeared to be a bit of a victory for Apple, which had argued in court that design was essential to the iPhone. The case was keenly watched as a precedent for whether design is so important that it could actually be considered the "article of design" even in a product as complex as a smartphone.

"We don't think it is supported by the evidence," Samsung attorney John Quinn told US District Court Judge Lucy Koh after the verdict was read in her courtroom in Silicon Valley.

"We have every concern about the determinations about the article of manufacture."

Quinn declined an offer by the judge to send jurors back for further deliberation, saying Samsung would pursue post-trial motions to address its concerns about the verdict.

Juror Christine Calderon said the panel agreed that one of the design patents - the grid of coloured icons - did represent the whole phone, while the other two at issue in the trial were seen as the display assembly that gave the iPhone its look.

The world’s top smartphone rivals have been in court over patents since 2011, when Apple filed a lawsuit alleging Samsung’s smartphones and tablets “slavishly” copied its products. Samsung was found liable in a 2012 trial, but a disagreement over the amount to be paid led to the current retrial over damages where arguments ended on May 18.

Samsung previously paid Apple $399 million to compensate Apple for infringement of some of the patents at issue in the case. The jury has been deliberating the case since last week.

In a statement, Apple said it was pleased that the members of the jury "agree that Samsung should pay for copying our products."

"We believe deeply in the value of design," Apple said in its statement. "This case has always been about more than money."

The new jury verdict followed a trial in San Jose, California, before Judge Lucy Koh that focused on how much Samsung should pay for infringing Apple patents covering aspects of the iPhone's design. The jury awarded Apple $533.3 million for Samsung's violation of so-called design patents and $5.3 million for the violation of so-called utility patents.

Apple this year told jurors it was entitled to $1 billion in profits Samsung made from selling infringing phones, saying the iPhone's design was crucial to their success.

Samsung sought to limit damages to about $28 million, saying it should only pay for profits attributable to the components of its phones that infringed Apple patents.