'You deserved to have your throat cut': 11 convicted for harassing schoolgirl over anti-Islam videos 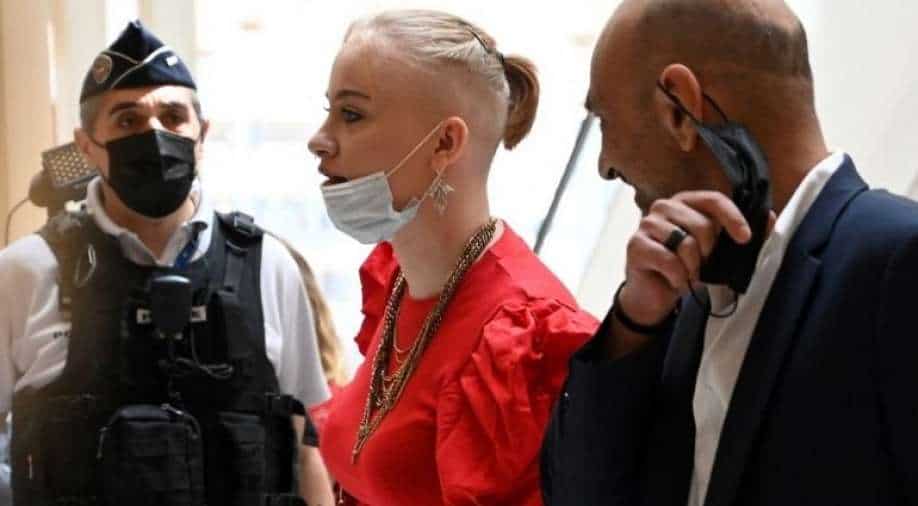 This file photo taken on June 3, 2021 shows Mila, a French teenage girl placed under police protection as she arrives with her lawyer Richard Malka (R) for the opening hearing of the trial of the so-called "Mila case", at Paris' courthouse. Photograph:( AFP )

A French court handed down suspended prison sentences of between four to six months to 11 people who were found guilty of harassing a teen online over her anti-Islam videos on social media.

A French court convicted 11 people on Wednesday for harassing a teen online over her anti-Islam videos in a case that has led to a fierce debate about free speech and the right to insult religions.

The prosecutions were also part of a judicial fightback against trolling and online abuse after the girl, known as Mila, was forced to change schools and accept police protection due to threats to her life.

The court in Paris tried 13 people from several French regions aged 18 to 30 who were charged with harassing Mila, who was sent over 100,000 abusive messages including death threats, according to her lawyer.

Eleven were handed suspended sentences, meaning they will not serve time in jail unless they are convicted for other offences, with some ordered to pay damages of 1,500 euros (1,800 dollars) and legal fees of 1,000 euros.

"Social networks are like the street," presiding magistrate Michael Humbert said on Wednesday as he handed down his judgements. "When you cross someone in the street, you don't insult, mock or threaten them.

One of those on trial wrote that Mila deserved "to have your throat cut", while others threatened sexual assault.

Since her rants against Islam in 2020, the previously unknown schoolgirl has become a divisive public figure in France, seen by supporters as a courageous fighter for free speech, and by critics as deliberately provocative and Islamophobic.

"We won and we will win again," Mila, 18, told reporters outside the court.

"I want us to never again make the victims feel guilty."

The case has received widespread public attention because it touches on hotly contested issues in France, from cyberharassment to the right to blaspheme, and attitudes to religious minorities.

In a first viral video posted on Instagram in January 2020, Mila, then aged 16 and openly lesbian, responded to personal abuse from a boy who she says insulted her about her sexuality "in the name of Allah".

She launched into an expletive-laden rant, declaring that "Islam is shit... Your religion is shit" along with other explicit comments about Allah deemed highly offensive to practising Muslims.

She published a second one in November of the same year.

France's strict hate speech laws criminalise inciting hatred against a group based on their religion or race, but they do not prevent people from criticising or insulting religious beliefs.

Amid wide-ranging political and media commentary, President Emmanuel Macron came to her defence, saying that "the law is clear. We have the right to blaspheme, to criticise and to caricature religions".

The arguments recall the debate in France about caricatures of the Prophet Mohammed which have been repeatedly printed by satirical magazine Charlie Hebdo in the name of freedom of expression.

The cartoons are deemed offensive by many Muslims.

Charlie Hebdo was attacked by Islamist gunmen in 2014, leaving some of its most famous staff members dead in an assault that profoundly shocked France.

In October last year, a schoolteacher called Samuel Paty was beheaded in the street after becoming the victim of an online hate campaign after he showed the cartoons to pupils during a class about free speech.

The trial in Paris saw the threats and comments made by the defendants read out in court.

Most of the accused had no previous criminal records and came from all backgrounds.

Some said they simply did not think before messaging what they assumed would be anonymous insults.

A 21-year-old language student identified as Lauren G. said she was "tired of seeing her (Mila's) name all the time in my news feed".

One of her co-accused, 19-year-old Axel G., said he reacted in anger because he considered Mila's remarks about Islam to be "racist" and "blasphemous."

The teen from the southeastern Isere region recently brought out a book entitled "I am the Price of Your Freedom".

"We no longer have the right to mock, criticise or insult religions, even when they are intolerant, sexist or homophobic," she wrote in one passage.