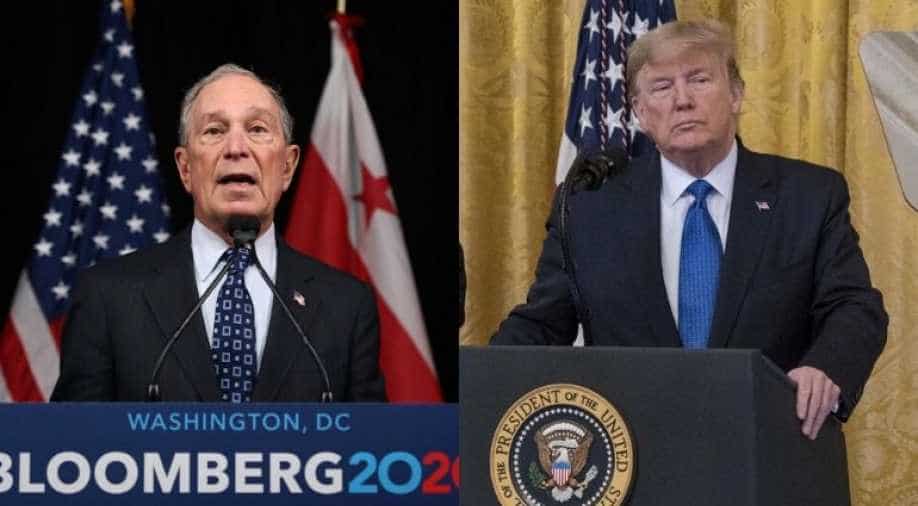 The remarks, made through the Democratic presidential candidate’s press secretary, came in response to Trump's remarks to FOX News Channel's Sean Hannity, coupled with a series of Twitter posts late on Saturday,

Michael Bloomberg on Sunday attacked Donald Trump, calling the president  “a pathological liar who lies about everything: his fake hair, his obesity and his spray-on tan”.

The remarks, made through the Democratic presidential candidate’s press secretary, came in response to Trump's remarks to FOX News Channel's Sean Hannity, coupled with a series of Twitter posts late on Saturday.

Trump told Hannity in an interview that Bloomberg, who stands at about 5 feet 8 inches compared to the president's 6 feet 3 inches, had requested a box to stand on during the Democratic debates, reported news agency Reuters.

Mini Mike is part of the Fake News. They are all working together. In fact, Bloomberg isn’t covering himself (too boring to do), or other Dems. Only Trump. That sounds fair! It’s all the Fake News Media, and that’s why nobody believes in them any more.

Last week, the Democratic National Committee (DNC) scrapped a rule requiring that candidates meet a threshold of grassroots donations, opening the door for Bloomberg to participate in a February 19 debate in Nevada. Bloomberg, a late entry to the race, has pledged not to take any donations and to finance his campaign.

Mini Mike is now negotiating both to get on the Democrat Primary debate stage, and to have the right to stand on boxes, or a lift, during the debates. This is sometimes done, but really not fair!

"He wants a box for the debates. Why should he be entitled to that? Really. Does that mean everyone else gets a box?" Trump asked Hannity during the interview which was taped on Saturday at the Republican president's Mar-a-Lago club in Florida.

The president also said he would “love to run against Bloomberg. I would love it”.

Bloomberg told reporters in Los Angeles he would “stand twice as tall as he does on the stage that matters” and said Trump “knows that I can beat him”.

Bloomberg has previously goaded Trump about their respective fortunes. According to Forbes, Bloomberg is worth around $60bn, 17 times as much as Trump.