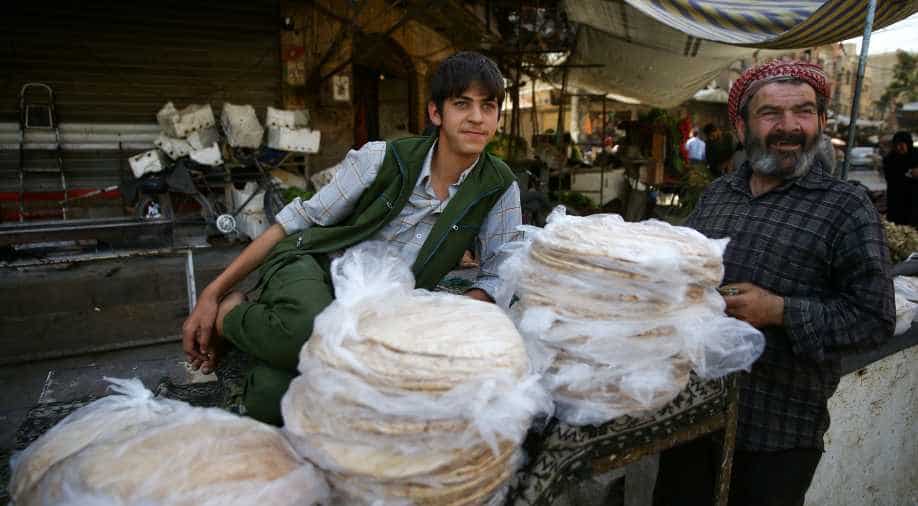 People sell bread in the rebel held besieged city of Douma, in the eastern Damascus suburb of Ghouta. Photograph:( Reuters )

For nearly four years, food, fuel and medicine have travelled across frontlines into the besieged eastern suburbs of Damascus through a network of underground tunnels.

But an army offensive near the Syrian capital has shut the routes into the rebel enclave of Eastern Ghouta, causing supplies to dwindle and prices to rocket, residents say.

"The price of fuel went up like crazy," said Adnan, 30, the head of a local aid group that distributes food.

A cooking gas canister now costs 50,000 Syrian pounds, nearly four times its price before the attack and almost 20 times the state-regulated price in nearby Damascus.

Adnan, whose aid group buys rice, lentils and other goods that arrive via the tunnels, said the shutdown and steep price hikes had triggered rising despair in the suburbs.

As the army tightens the noose, fighters and civilians are bracing for a full-blown assault and bitter shortages that could last through the winter.

"The operation aims to strangle the Ghouta ... by closing off the crossings and tunnels," Hamza Birqdar, military spokesman for the Jaish al-Islam rebel group, told Reuters.

"Trade through the tunnels has completely stopped."

Government forces have blockaded Eastern Ghouta, a densely populated pocket of satellite towns and farms, since 2013. It remains the only major rebel bastion near Damascus, though it has shrunk by almost half over the past year.

President Bashar al-Assad's government has been steadily defeating pockets of armed rebellion near the capital, with the help of Russian air power and Iranian-backed militias.

It ultimately aims to seize the Ghouta, pushing fighters to accept state rule or leave for rebel territory in the north, in a type of negotiated withdrawal that has helped shore up its rule over Syria's main urban centres.

Heavy fighting and air strikes have rocked the districts that stand between Damascus and Eastern Ghouta, severing smuggling routes that provided a lifeline for around 300,000 people in the besieged suburbs.

The army assault entered a higher gear in recent months in the districts of Barzeh and Qaboun, at the capital's eastern edges, which abruptly ended a local truce that had been in place with rebels there since 2014.

Their relative calm and location had turned them into a transit point where traders brought supplies from the capital and shuttled them underground into the opposition enclave. Government forces have now swept into most of the two districts.

The siege generated a black market economy and profiteers who traded across frontlines, says an activist who has smuggled medicine through one of the tunnels.

Goods prices were ramped up by payments to checkpoints in government-held areas and rebels that control the tunnels, the activist and other residents said.

Syrian officials were not available for comment on such allegations.

Syrian state media says Ghouta militants dug tunnels hundreds of metres long to move weapons and ambush army positions. The tunnels have been a target of army operations, with several blown up in recent months, it has said.

The wide array of rebels - including hardline jihadists and other groups supported by Turkey, the United States and Gulf monarchies - have been on the back-foot across Syria.

In Eastern Ghouta, a bout of renewed rebel infighting, after a rebel attack at the fringes of Damascus quickly fizzled out in March, could play into the government's hands.

Birqdar said rebels faced "heavy shelling, air strikes, and incoming tanks" every day. "We must prepare for every scenario that could happen on the battlefield," he said.

"We are fully ready to negotiate over stopping the bloodshed by the regime, but will not accept any talks that lead to surrender." He ruled out a local evacuation deal.

The government says such deals have succeeded where UN-based peace talks failed. The opposition describes it as a strategy of forced displacement after years of siege - a method of warfare the United Nations has condemned as a war crime.

The UN has warned of impending starvation if aid does not reach Eastern Ghouta, where international deliveries have long been erratic and obstructed. A convoy that entered last week, for the first time in months, carried food and supplies for just about 10 per cent of the estimated population.

"People have rushed to the markets to stock up," said Adnan. "Because they have bitter memories of 2013," when their towns first came under siege.

Merchants inside the Ghouta had filled up large warehouses that would last months, and residents would harvest crops in the area's remaining farmland in the summer, he said. "Things will get worse when winter comes."

The Wafideen crossing at the outskirts, where checkpoints allowed food to enter, has also been restricted since February, Adnan and others said.

One resident said rebel fighters also ran their own hidden routes through which they had moved unnoticed or smuggled arms.

Medics relied on the tunnels for antibiotics, anaesthetics, and other supplies, said Abu Ibrahim Baker, a surgeon in Eastern Ghouta. Hospitals would be "able to hold out, God willing, but not for very long," he said.