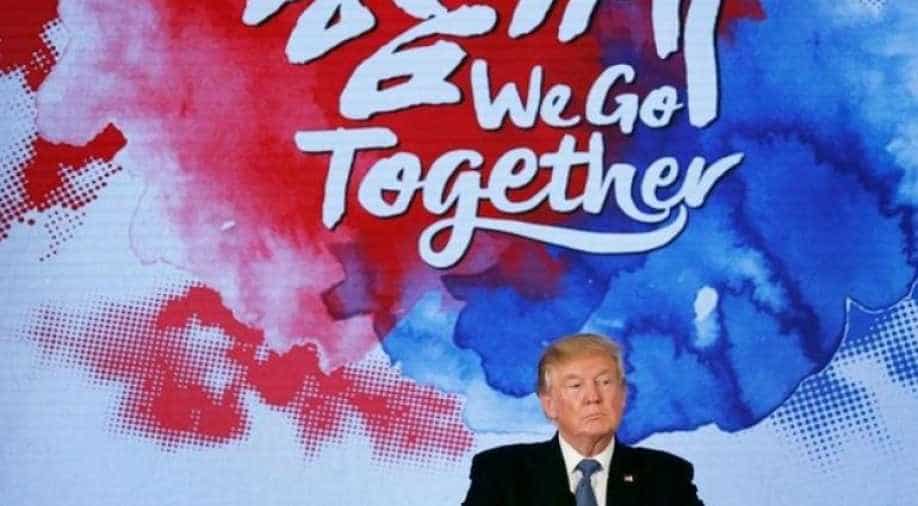 Trump has insisted he remains committed to the summit, but Vice President Mike Pence warned on Monday that the president was still willing to walk away from the meeting

Three weeks before an unprecedented US-North Korea summit is supposed to take place, President Donald Trump will meet South Korean President Moon Jae-in on Tuesday as US&nbspofficials try to figure out whether Pyongyang is serious about negotiating a deal on denuclearisation.

Moon’s White House visit was originally arranged as a meeting to fine-tune a joint strategy for dealing with North Korean leader Kim Jong Un but has instead become more of a crisis session after Pyongyang last week threatened to pull out of the planned June 12 summit in Singapore.

Moon’s government-led efforts to resume dialogue with North Korea and gave enthusiastic accounts of its encounters with Kim, spurring Trump to accept an offer of the first-ever meeting between US&nbspand North Korean presidents.

But the White House was caught off-guard when, in a dramatic change of tone, North Korea last week condemned the latest US-South Korean air combat drills, suspended North-South talks and threw into doubt the summit with Trump if Pyongyang was pushed toward "unilateral nuclear abandonment."

Trump has insisted he remains committed to the summit, but Vice President Mike Pence warned on Monday that the president was still willing to walk away from the meeting, telling Fox News that North Korea should not attempt to seek concessions for promises it did not intend to keep.

Trump has warned in the past that the summit might not take place or that he could walk out if it looked like a deal was not possible. His aides are now looking to Moon to help determine whether Kim is taking a harder line against denuclearisation than South Korea had previously communicated to them, a US&nbspofficial said, speaking on condition of anonymity.

Other US&nbspofficials have privately expressed concern that Moon, eager to make progress with the North, may have overstated Kim’s willingness to negotiate in good faith over the dismantling of his nuclear arsenal.

Two visits by US&nbspSecretary of State Mike Pompeo over the past two months have apparently failed to yield much clarity on Kim’s intentions.

Some in the US&nbspgovernment worries that Moon may be prepared to accept a less-stringent version of North Korean denuclearisation than Washington wants and could be open to faster sanctions relief for Pyongyang, the officials said.

Most analysts say it is unrealistic to believe North Korea will agree to complete abandonment of its nuclear program, which has focused on developing a missile capable of hitting the United States and which Kim sees as crucial to his survival in power.

If the summit is cancelled or fails, it would be a major blow to what Trump supporters hope will be the biggest diplomatic achievement of his presidency.

The uncertainty comes at a time when Trump’s withdrawal from the Iran nuclear deal has drawn criticism internationally, his moving of the US&nbspembassy to Jerusalem has fueled violence on the Israel-Gaza border and he is on the defensive over an investigation into alleged Russian meddling in the 2016 election.

North Korea's warning of a possible withdrawal from the summit is seen as an effort to test Trump’s willingness to make concessions on his demands for Pyongyang's denuclearisation, the US&nbspofficial said.

"It’s straight out of North Korea’s playbook," the official said.

North Korea’s condemnation of Trump’s hawkish national security adviser, John Bolton, for proposing that North Korea should emulate Libya by abandoning its program of weapons of mass destruction was believed meant to sow divisions within the administration.

Despite Trump having contradicted Bolton on the Libya point, there has been no sign of Bolton losing influence.

Seoul has been hoping to ensure a successful summit after a historic meeting last month between Moon and Kim produced a declaration of goodwill.

But South Korea’s role has been brought into question since last week when North Korea's chief negotiator derided Seoul as "ignorant and incompetent."

Seoul has refrained from responding.

"The heads of South Korea and the United States are expected to discuss measures to guarantee a bright future for North Korea in the case it truly goes through complete denuclearisation," said Nam Gwan-pyo, an official at the presidential Blue House.

Trump has sought to placate Kim by holding out the possibility of economic development, and he pledged on Thursday that Kim’s security would be guaranteed in any deal.

But Trump has insisted on concrete steps before any easing of sanctions and warned that failure to reach a denuclearisation agreement could lead to "decimation" of Kim's rule.

"They are locked into not giving much to the North Koreans early...whereas South Korea probably has a bit more interest in economic incentivization," said Christopher Green, an analyst with the International Crisis Group. "So they need to calibrate between the two of them."

China could also be on the agenda. Trump suggested last week that Beijing, which Washington is at odds with over trade, may be influencing North Korea's hardened stance.

Beijing responded on Friday that it stands for stability on the Korean peninsula and for settlement through diplomacy.

However, Trump on Monday urged China, North Korea's main trading partner, to maintain tight sanctions, tweeting that "the word is that recently the Border has become much more porous."