Why Chinese Americans are talking about Eileen Gu 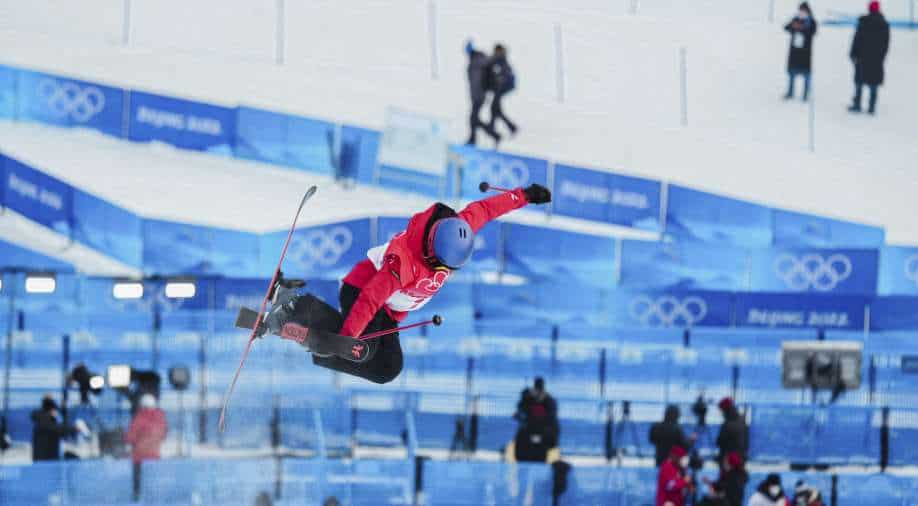 But like her or not, many Chinese Americans interviewed in the New York region this week agreed on one thing: When Gu says, as she often does, “When I’m in the U.S., I’m American, but when I’m in China, I’m Chinese,” it resonates with them.

When it comes to Eileen Gu, the 18-year-old Olympic gold medalist freestyle skier who was born in San Francisco but competed for China, Chinese Americans have lots of opinions.

There are those who love her, moved by her ability to soar over treacherous slopes with ease. Others are inspired by her efforts to navigate the uneasy political tension between two countries and cultures. Some believe she chose to represent China simply to cash in on the lucrative opportunities it has afforded her.

But like her or not, many Chinese Americans interviewed in the New York region this week agreed on one thing: When Gu says, as she often does, “When I’m in the U.S., I’m American, but when I’m in China, I’m Chinese,” it resonates with them.

“I think what I’m seeing is somebody who isn’t afraid to love her identities and share that with people,” said Sarah Belle Lin, 28, a Harlem resident. “I think it’s so brave, actually, for her to speak about that on a public platform.”

To Lin and more than two dozen other Chinese Americans interviewed in the New York metro area, home to the country’s largest Chinese American population as of 2019, Gu’s statement expresses a duality that resembles their lived experiences. And they find that duality comfortable, they said, not counterintuitive.

For that reason, many expressed dismay about social media users and conservative pundits calling Gu a “traitor” and “ungrateful,” painting her as somehow not quite an American because she had chosen to compete for China, and suggesting that her identity must fall into a binary — Chinese or American, but not both.

Gu has repeatedly stated that she made her choice because she wanted to serve as a role model for female athletes in China, and raise the profile of skiing in a country where it is still largely a nascent sport.

Some of those interviewed said they viewed the questioning of her loyalty as a troubling reminder of ongoing Orientalist stereotypes of Asian Americans as “perpetual foreigners” with the potential to undermine the United States, even though many of them call the country their home.

“I think, if political tensions continue to rise, we will find ourselves in situations, whether we’re in the States or in China, where people will push us to identify with one over the other,” said Easten Law, 38, of Princeton, New Jersey.

“For us everyday Chinese Americans, we’re going to have to deal with the same issues of, you know, claiming versus disassociating, and parsing through what to identify with and what not to,” he said. “I think it’s inevitable.”

For others, the criticism against Gu felt personal. Several described experiencing the weight of other people’s narrow expectations of how Asian Americans should act, think and identify.

Jessica Wu, a Queens resident, never felt this projection more clearly than in 2017, when she flew from Portugal to Philadelphia. While passing through immigration with others from her flight, Wu said, a Transportation Security Administration agent laughed when he saw her U.S. passport and asked if she was actually an American citizen.

“Even though I never felt like I have to choose or even think about my identity, I think other people make that assumption for me, or they put their own racist assumptions on me,” Wu said.

Though Gu, who was born to a Chinese mother and an American father, has described herself as a typical Asian American teen, she had an unusually privileged childhood. She was raised in an affluent neighborhood of San Francisco, attended an elite private school and spent most summers in Beijing.

Her experience since then has been similarly uncommon. She has been allowed to compete with an ambiguous citizenship status: China does not allow dual citizenship, but there is no record of Gu having renounced her American citizenship.

And then there’s the fact that she has been able to tap into a vast pool of sponsorships, in part because competitive skiing is still a growing field in China.

She has contracts with more than 30 international brands, according to The Wall Street Journal, including Tiffany & Co. and Louis Vuitton, and her rising modeling career has put her on the covers of the Chinese editions of Vogue and Marie Claire.

Lai Ling Li, 38, who said she was a fan of Gu, said she thought China’s audience of 1.4 billion people likely drove the athlete’s decision.

“I don’t know any other athlete who’s able to do that, especially at 18 years old,” she added.

Whether or not Gu was motivated by identity or national preference, her story is one that is now inextricably tangled up in both.

The relationship between China and the United States has reached a new low in recent years as China’s economic and military global power has grown. The tension was compounded by former President Donald Trump’s punitive trade policies and explicit anti-Chinese statements at the height of the coronavirus pandemic. As assaults against Asian Americans spiked across the country over the past two years, many attackers parroted the former president’s rhetoric.

Under the shadow of today’s antagonism, Gu has had to field countless questions about everything from whether she intends to renounce her U.S. citizenship to her thoughts on China’s censorship policies and the sexual assault allegations made by Peng Shuai, one of the country’s star tennis players, against a senior government official.

Gu has stressed repeatedly that she wants to avoid discussing politics when it comes to China, telling The New York Times in a previous interview that she did not want to be “divisive” and that her mission is “all about inclusivity.”

In New York, many of those interviewed said her decision to compete for China should not be conflated with a political preference, arguing that it was unfair to expect someone’s identity to represent a country or its political climate. (Others noted that she was just 15 when she made the choice.)

“To be Chinese doesn’t mean that you are always in support of China’s government,” said Lucy Yu, 27, who recently opened Yu and Me Books, a bookstore in Manhattan’s Chinatown. “I can respect that and also understand the difficulties that come with expressing that.”

Some said they were confused as to why Gu had chosen to compete for a country facing widespread allegations of human rights abuses, such as accusations of carrying out a genocide against Uyghurs and other Muslim residents, and a history of suppressing those who have attempted to sound the alarm over social unrest or government wrongdoing.

Others said that although they did not believe Gu was obligated to speak up on issues affecting Chinese people, they did not understand why she had chosen to stay tight-lipped on matters in China while making her position clear on issues relevant to Americans, such as the rise in anti-Asian attacks and the Black Lives Matter movement.

Ricky Yeh, 37, said as a Taiwanese American, he was troubled by Gu’s choice. Beijing considers the island part of China and has long demanded unification, but an increasing number of Taiwanese people have distanced themselves from mainland culture.

“If you are a supporter of human rights, according to her public speech, then why do you support that kind of country?” Yeh said. “Maybe that’s not her priority. But in recent days, every country has recognized that China has been harming human rights in every way they can.”

And some, such as Ming Xia, a professor of political science at the City University of New York’s Graduate Center, feared that the longer Gu competes for China, the more vulnerable she may become to any of the country’s attempts to exploit her image for political propaganda.

“She was recruited to compete on behalf of China, but she was not recruited to become the spokesperson for China’s toxic patriotism,” Xia said.

Perhaps at the heart of the controversy is the question of what it means to be Asian American, and how that evolving description stretches and bends for each person.

Lin, the Harlem resident, plans to live in Hong Kong or Shanghai for a few years. She said that wherever she ends up moving, she would be just as American there as she is Asian while living in the U.S.

The idea that someone would feel justified in questioning her identity or even her political loyalty over this choice, she said, angered her. And although members of the public may have already made up their minds about who Gu is and what she stands for, she said, only the athlete herself will know the answer.

“I’m Asian American, now and forever,” Lin said. “And I feel like the same goes for anybody who wants to say the same.”