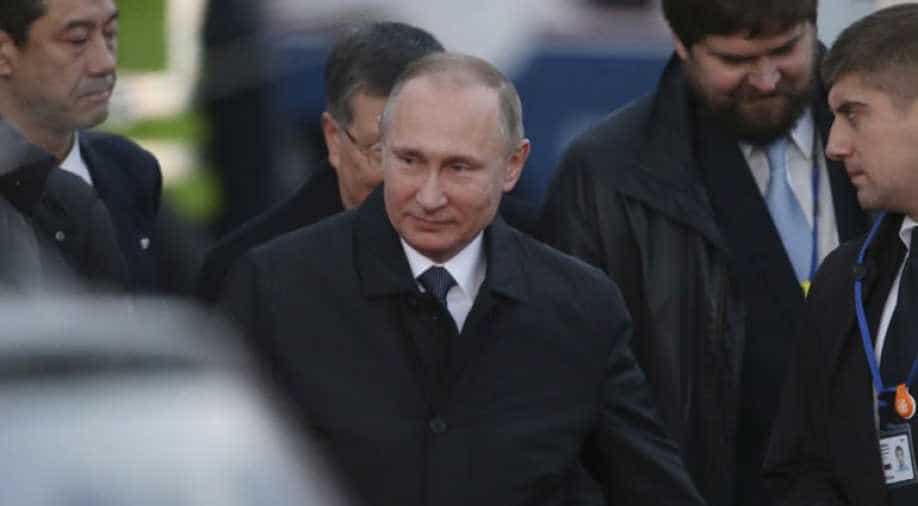 A top adviser to Obama said a significant cyber intrusion of this scale couldn't have happened without Putin's knowledge. Photograph:( AFP )

The White House on Thursday pointed to Russian President Vladimir Putin's direct involvement in cyber attacks designed to impact the US election, dramatically upping the stakes in a dispute between the world's leading nuclear powers.

Publicly accusing Putin puts the White House under even greater pressure to respond forcefully to interference that may have swayed a tight November election between Republican President-elect Donald Trump and Democrat Hillary Clinton.

Obama will hold a news conference Friday at 2:15 pm (1915 GMT) before leaving for a vacation in Hawaii. He is expected to be peppered with questions about the hacking dispute.

"I don't think things happen in the Russian government of this consequence without Vladimir Putin knowing about it," said Ben Rhodes, a top adviser to President Barack Obama.

"Everything we know about how Russia operates and how Putin controls that government would suggest that, again, when you're talking about a significant cyber intrusion like this, we're talking about the highest levels of government," he told MSNBC television.

"And ultimately, Vladimir Putin is the official responsible for the actions of the Russian government."

His comments were echoed by White House spokesman Josh Earnest, who said that the decision by US intelligence agencies in October to publicly blame "Russia's senior-most officials" was not meant to be "particularly subtle."

But blaming Putin now also puts the White House on a collision course with Trump himself, who continues to question Russian involvement in hacks of Democratic Party emails that were unflattering to Clinton.

"If Russia, or some other entity, was hacking, why did the White House wait so long to act? Why did they only complain after Hillary lost?" he tweeted.

The 70-year-old billionaire-turned-incoming president appeared increasingly isolated in his stance, which runs against US intelligence estimates.

The conclusions by key bodies including the Central Intelligence Agency and the Federal Bureau of Investigation have been accepted throughout the government, including among top members of Trump's own party.

In just five weeks, Trump will be in charge of those agencies when he succeeds Obama on January 20.

On Wednesday, senior Republican Senator Lindsey Graham said he was informed by the FBI in August that his own campaign had been hacked.

"My goal is to put on President Trump's desk crippling sanctions against Russia. They need to pay a price," he said.

Former CIA director Michael Hayden called Trump "the only prominent American that has not yet conceded that the Russians conducted a massive covert influence campaign against the United States."

The Kremlin rejected the allegations of Putin's involvement.

Trump's repeated dismissal of the CIA and FBI reports, and comments he made that former CIA officials call insulting to the intelligence community, threaten to undermine his relationship with an essential part of the government even before he takes office.

As for Trump's assertion that no one addressed the issue before his election win, Obama has repeatedly said both the Democratic National Committee and the Republican National Committee were apprised of the hacking and the Russian threat well before November 8.

"We determined and announced in October that it was the consensus of all the intelligence agencies and law enforcement that organizations affiliated with Russian intelligence were responsible for the hacking of the DNC, materials that were being leaked," Obama said Monday.

"So that was a month before the election -- this was not a secret."

In Congress, some senior legislators are demanding a broad investigation and declassification of at least some of the secret CIA and FBI reports.