‘What the f*** are you doing’: Video of Ukrainian woman confronting Russian soldiers goes viral 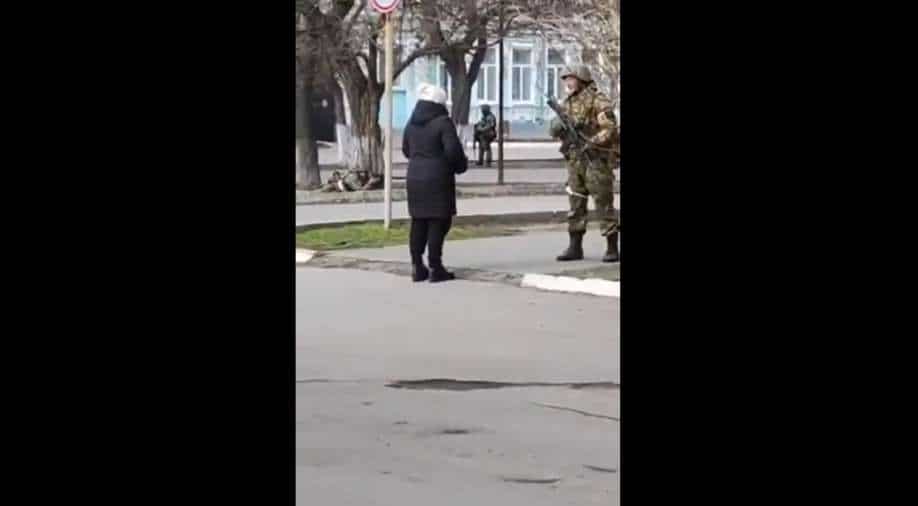 A Ukrainian woman confronting a heavily-armed Russian soldier and demanding to know what they were doing in her country has gone viral in social media, with many hailing her as “brave”.

The woman, a resident of Henychesk, Kherson region, was seen voicing her outrage as Russia launched a full-scale attack on Ukraine, with tanks and jets covering various parts of the city and causing major destruction.

According to the video shared by Ukraine World news outlet on Twitter, the woman was seen offering sunflower seeds, the national flower of Ukraine, to the soldier, so that flowers might bloom when they die on Ukrainian land.

Ukrainian woman confronts Russian soldiers in Henychesk, Kherson region. Asks them why they came to our land and urges to put sunflower seeds in their pockets [so that flowers would grow when they die on the Ukrainian land] pic.twitter.com/ztTx2qK7kB

According to The Independent, the woman in the clip can be seen purportedly asking the soldiers, "Who are you?", to which a soldier standing in the street replies, “We have exercises here. Please go this way.”

After asking if they are Russians, she said: “So what the f*** are you doing here?”

When the soldiers tried to pacify her, the enraged woman said, "You’re occupants, you’re fascists! What the f*** are you doing on our land with all these guns?”

“Take these seeds and put them in your pockets, so at least sunflowers will grow when you all lie down here,” she said.

Ever since the video became viral, the woman has received an outpouring of support from many users.

“The coming days and nights in #Ukraine are likely going to be long and hard. But with spirit like this woman shows, #Putin may find he bit off way more than he can chew. #PocketSunflowers to grow sunflowers from their graves!” a Twitter user said.

“Am I the only one reading that over and over, and getting chills each time?” wrote Chris Taylor, another Twitter user.