What happens when people contract two strains for coronavirus at once 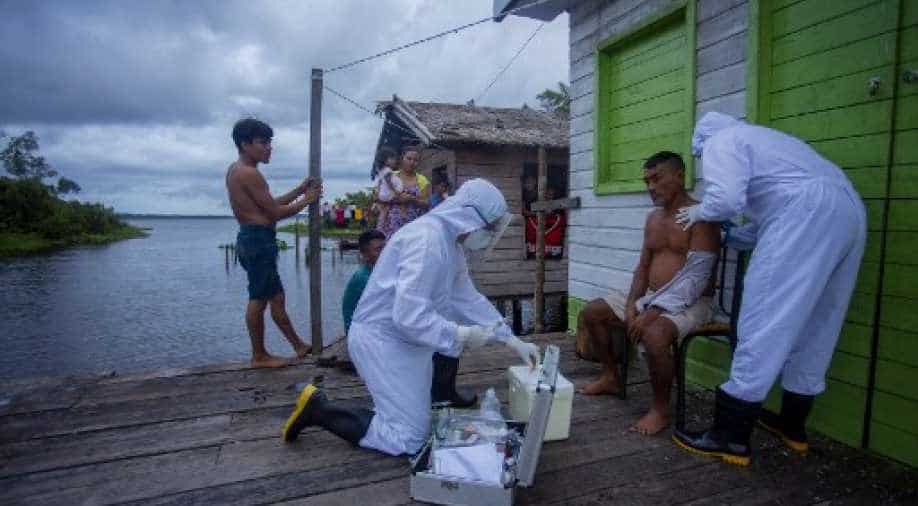 Health workers from the city of Melgaco check a resident of a small riverside community in the southwest of Marajo Island, state of Para, Brazil Photograph:( AFP )

The detection of multiple variants in a person could be the result of co-infection by the different variants, or the generation of mutations within the patient after the initial infection

The detection of multiple variants in a person could be the result of co-infection by the different variants, or the generation of mutations within the patient after the initial infection.

To differentiate these two scenarios, a comparison is drawn between the sequences of the variants circulating in the population with those in the patient.
Brazil set a daily record for COVID-19 deaths for a second straight day on Wednesday, as a resurgence of the virus led the state of Sao Paulo to shutter businesses and the government to try to close vaccine deals with Pfizer and Janssen.

With a new variant from the Amazon spurring more infections, 1,910 people died of the virus in the past 24 hours, health ministry data shows. In a year, Brazil`s death toll has nearly topped 260,000, the world`s second-worst after the United States.

A sputtering vaccination campaign has also put pressure on Health Minister Eduardo Pazuello, who said on Wednesday he was close to an agreement with Pfizer, effectively overcoming a dispute over liability clauses.

Recent reports of novel variants in the United Kingdom, South Africa and Brazil have raised intense interest because of a possible higher transmission rate or resistance to the novel vaccines.

This is a known phenomenon in RNA viruses. New variants of influenza are generated by a similar mechanism called "reassortment". The genome of the influenza virus, unlike coronavirus, comprises eight segments or strands of RNA.

When two viruses infect the same cell, these segments mix and match to produce viruses with a new combination of genes.

With coronaviruses, which only contain one RNA strand in each virus particle, recombination can only occur between RNA strands derived from one or more viruses in the same cell.

Evidence of recombination has been found both in the laboratory and in a patient infected with SARS-CoV-2, suggesting that this could drive the generation of new variants. In fact, the ability of SARS-CoV-2 to infect human cells is proposed to have developed via recombination of the spike protein between closely related animal coronaviruses.