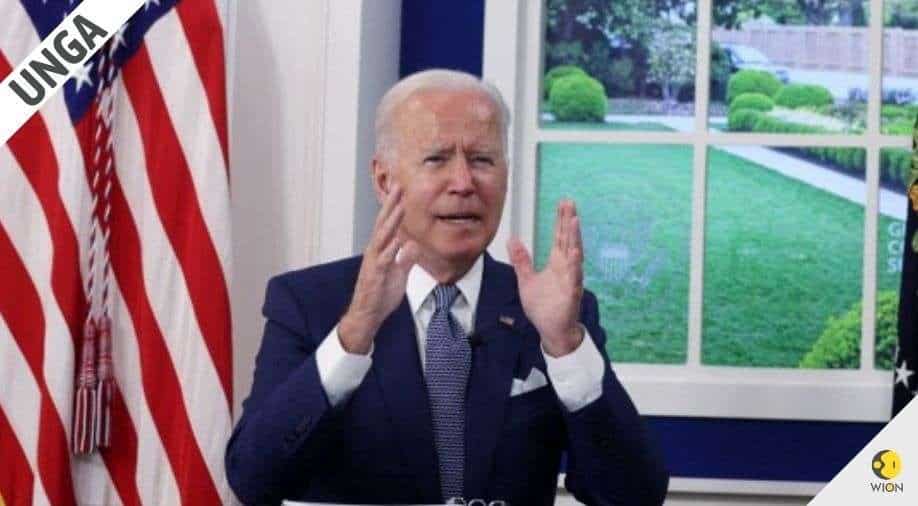 US President Joe Biden speaks during a virtual Covid Summit of the United Nations General Assembly at the South Court Auditorium at Eisenhower Executive Office Building on Wednesday in Washington, DC. Photograph:( AFP )

US President Joe Biden is calling on other world leaders, pharmaceutical executives, philanthropists and civil society organizations to band together to forge a global consensus to fight Covid

Declaring “we need to go big,” President Joe Biden on Wednesday called on other world leaders, pharmaceutical executives, philanthropists and civil society organizations to band together to forge a global consensus around a plan to fight the coronavirus crisis.

Speaking at the opening of a virtual COVID-19 summit he is convening in conjunction with the United Nations General Assembly meeting in New York, Biden cited two especially urgent challenges: vaccinating the world against COVID-19 and solving a global oxygen crisis, which is leading to unnecessary deaths among COVID-19 patients who might survive if oxygen were available.

“We’re not going to solve this crisis with half measures or middle of the road ambitions — we need to go big,” the president said, adding, “It’s an all-hands-on-deck crisis.”

But it may be hard to turn Biden’s words into reality. Less than 10% of the population of poor nations — and less than 4% of the African population — has been fully vaccinated against COVID-19. COVAX, the World Health Organization-backed international vaccine initiative, is behind schedule in delivering shots to the low- and middle-income nations that need them the most.

Around the world, more than 4.5 million people have died of COVID-19 — a “global tragedy,” Biden said. But critics of the administration had low expectations for the gathering.

“This summit deserves to be, needs to be, a debate of historic dimensions,” Peter Maybaruk, access to medicines director for Public Citizen, the consumer advocacy organization, which has been urging the administration to adopt a $25 billion plan to scale up vaccine manufacturing around the world.

“But it won’t be that kind of debate,” he added. “The summit plan is for a long afternoon of videos, many of them recorded in advance. The hosts are unlikely to be significantly challenged by developing country governments and people at risk of losing their families. Which means, as important as the summit is to corral further commitments, it will not produce the transformative response needed to end the pandemic.”

The summit was to begin with Biden and other world leaders, including António Guterres, the secretary-general of the United Nations, gathering virtually for a small panel discussion entitled “Call the World to Account and Vaccinate the World,” moderated by Linda Thomas-Greenfield, Biden’s ambassador to the United Nations. Participants include other presidents and prime ministers, including President Cyril Ramaphosa of South Africa and Prime Minister Boris Johnson of Britain, according to an agenda obtained by The New York Times.

Vice President Kamala Harris is scheduled to lead a session at the summit around 1:30 p.m. ET on preventing future pandemics.

White House officials have said that Biden’s message to the group will be that the U.S. cannot fight the pandemic or address the global vaccine shortage on its own. Earlier Wednesday, Pfizer-BioNTech announced that it had struck a deal with the Biden administration to sell the U.S. an additional 500 million doses of its coronavirus vaccine, to be donated to nations that need them. Biden heralded the deal in his opening remarks.

Drug company executives, philanthropists and leaders of nonprofit organizations have also been invited to the summit, which administration officials say is the largest gathering of heads of state to date to address the global pandemic.

Biden has been under intense pressure from global health experts to do more to address the vaccine shortage.

At a briefing held by Physicians for Human Rights earlier this week, Dr. Soumya Swaminathan, WHO's chief scientist, sounded a note of urgency and issued a plea for nations to work together to distribute vaccines in a coordinated — and equitable — fashion. She also urged countries to share their excess supplies.

“A country-by-country approach, a nationalistic approach, is not going to get us out of this pandemic,” she said. “And that’s where we are today.”