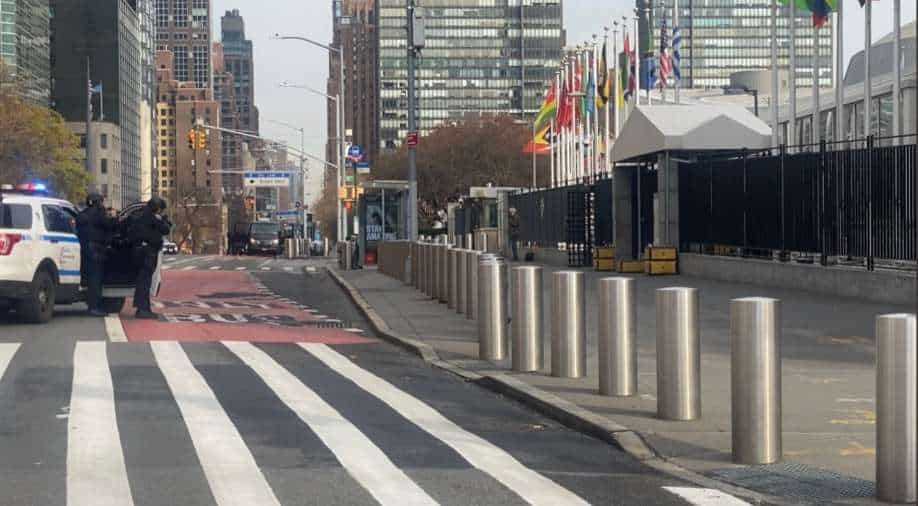 The New York Police has cordoned off the UN premises and surrounded the man Photograph:( Twitter )

New York police officers are in a stand-off after a lone man believed to be holding a gun was spotted outside the United Nations headquarters in New York on Thursday.The police have cordoned off the premises and surrounded the man.

According to an official speaking on condition of anonymity, the man threatened to kill himself in front of one of the building's entrances, reports AFP

“The UN headquarters is closed, there is police activity,” a UN spokesman told AFP.

Images and videos went viral on social media which showed armed police surrounding the man standing on a sidewalk.

Stand-off --Man with gun pacing in front of the United Nations. Police saying "put down the guy. There are better ways to get your message out." White male. Grey hair. Red sweater tan jacket. pic.twitter.com/qOB5NACBne

Man appears to be holding a long gun pointed at his chin. NYPD appears to be trying to defuse situation. pic.twitter.com/6vibIy1v0D

“Put down the gun. There are better ways to get your message out,” a police officer was heard was saying to the unidentified man.

So far, the identity and the motive behind such an extreme move has not been ascertained.

According to reports, the man is a middle-aged white male with grey hair wearing a red sweater and tan jacket.

The avenue along the UN headquarters was closed to traffic, but meetings inside were not immediately affected.

“Due to a police investigation, avoid the area of 42 Street and 1st Avenue. Expect emergency vehicles in the surrounding area,” the New York police department said on Twitter.