Watch: Barack Obama reunites with the boy who touched his head 13 years ago 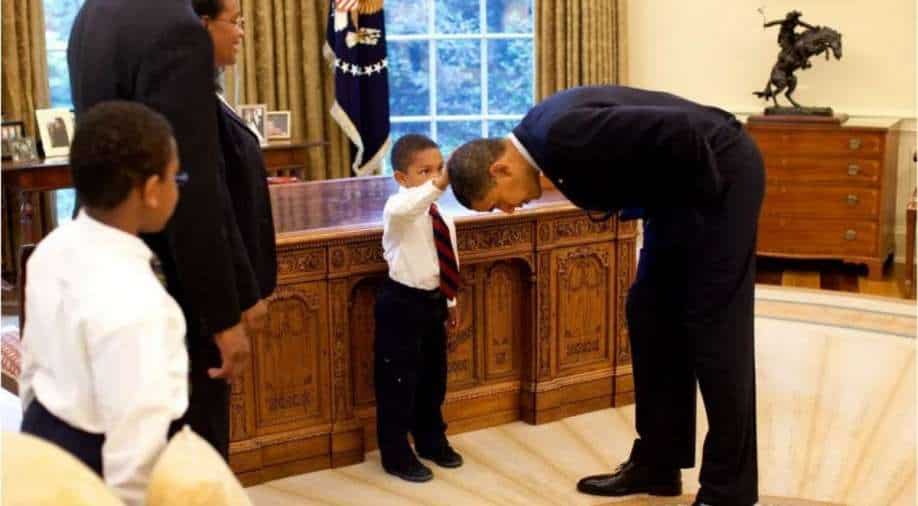 Former US President Barack Obama appears to be bowing to 5-year-old Jacob Philadelphia, his arm raised to test whether the president's hair is his. Photograph:( The New York Times )

On 26 May, former US President Barack Obama shared his virtual reunion with Jacob Philadelphia, the boy who famously touched his head in the 2009 photo Hair Like Mine.

Five-year-old Jacob Philadelphia entered the Oval Office in May 2009, a few months after then-President Barack Obama took office, unaware that he would become part of America's first Black commander-in-chief.

"I want to know if my hair is just like yours," he said to Obama in a tone so low that the then-president asked him to repeat his question.

After hearing the question, Obama remarked: "Why don't you touch it and see for yourself?"

The US president bent over, but Jacob hesitated to move his hand.

Also read | I was not very happy about that: Obama takes a dig at Trump at COP26

Pete Souza, then-White House photographer, immediately snapped what would become an iconic image, which he dubbed "Hair Like Mine" as a statement about the power of representation.

"Yes, it feels the same," Jacob said when Obama asked how it felt to touch his hair.

Obama spoke with Jacob through Zoom on Friday to congratulate him on his graduation from the International School of Uganda, which is located on the outskirts of Kampala.

Obama during the video call with Jacob remarked on the personal significance of the photo.

Jacob Philadelphia was five years old when he visited the Oval Office and asked if his hair was like mine. That photo became one of our favorites – a reminder of the power of seeing yourself in your leaders.

"I think this picture embodied one of the hopes that I had when I first started running for office," the former president said.

He continued: "I remember telling Michelle and some of my staff, you know, I think that if I were to win, the day I was sworn into office, young people, particularly African-American people, people of color, outsiders, folks who maybe didn't always feel like they belonged, they'd look at themselves differently. To see a person who looked like them in the Oval Office. It would speak to Black kids and Latino kids and gay kids and young girls — how they could see the world open up for them."