War in Yemen: Aid group says over 84,000 children may have died from extreme hunger 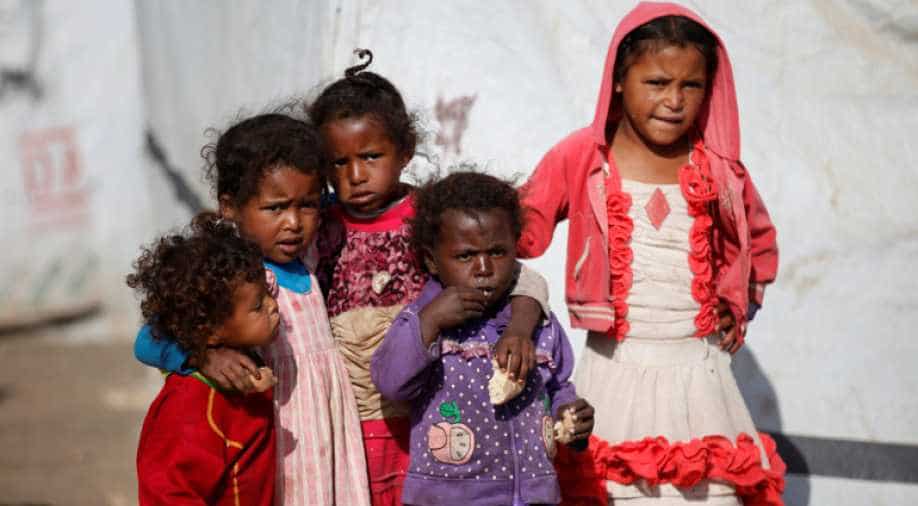 An estimated 85,000 children under five may have died from extreme hunger in Yemen since a Saudi-led coalition intervened in the civil war in 2015, an aid agency said on Wednesday, as the UN special envoy arrived in Yemen to pursue peace talks.

An estimated 85,000 children under five may have died from extreme hunger in Yemen since a Saudi-led coalition intervened in the civil war in 2015, an aid agency said on Wednesday, as the UN special envoy arrived in Yemen to pursue peace talks.

Western countries are pressing for a ceasefire and renewed peace efforts to end the disastrous conflict, which has unleashed the world’s most urgent humanitarian crisis with 8.4 million people believed to be on the verge of starvation.

Save the Children said that a conservative estimate based on UN data showed 84,700 children suffering from severe acute malnutrition may have died between April 2015 and October 2018, when a Western-backed Arab alliance has been battling the Iran-aligned Houthi movement that holds the capital Sanaa.

"We are horrified that some 85,000 children in Yemen may have died because of the consequences of extreme hunger since the war began. For every child killed by bombs and bullets, dozens are dying from hunger and disease and it's entirely preventable," it said in a statement.

The last available figure from the United Nations for the death toll from the conflict, seen as a proxy war between Saudi Arabia and Iran, was in 2016 and stood at more than 10,000.

The world body has not provided figures for the death toll from malnutrition but warned last month that half the population, or some 14 million people, could soon be on the brink of famine and completely reliant on humanitarian aid.

The International Committee of the Red Cross (ICRC) said it had no fatality figures but both malnutrition and fighting were taking a heavy toll on civilians.

"What we see in all the different (health) centres and places that we are working in, it's a very catastrophic humanitarian situation, but not only malnutrition," Carlos Batallas, outgoing head of the ICRC delegation in Aden, told Reuters in Geneva.

"One of the problems that we are seeing today is that vaccination has not been followed through, that you have pregnant women that have no pre-natal care, women that cannot deliver kids at hospitals or a health centre with nurses."

The Armed Conflict Location & Event Data Project (ACLED), a database that tracks violence in Yemen, says around 57,000 people have been reported killed since the beginning of 2016.

The Saudi-led coalition intervened in Yemen in March 2015 to restore the government that was ousted from Sanaa in 2014 by the Houthis, who control most population centres.

Since seizing the southern port city of Aden in 2015, the Arab coalition has faced a military stalemate and has been focusing on wresting control of the main port city of Hodeidah to weaken the Houthis by cutting off their main supply line.

So far there has been no halt to fighting in Hodeidah, despite an announcement by the coalition last week that it would stop military operations there. A few days later the Houthis announced a halt to missile and drone attacks on coalition leaders Saudi Arabia and the United Arab Emirates and their Yemeni allies.

Intense fighting in the past two days has taken place in Hodeidah mostly at night, as each side tried to reinforce its positions during the de-escalation in hostilities.

"Loud bangs, shelling and gunfire could be heard all over the city until dawn," a Hodeidah resident said on Wednesday.

The medical charity Medecins Sans Frontieres said fighting was moving closer to a hospital where its staff operate.

"Our staff can hear explosions and shootings occurring extremely close by every day around Al-Salakhana hospital," its operations manager for Yemen said in a statement.

A pro-coalition Yemeni military source told Reuters on Monday that a ceasefire in Hodeidah would start only after the UN Security Council passes a British-drafted resolution on Yemen. Aid groups fear an all-out assault on the city, entry point for more than 80 per cent of Yemen's food imports, would unleash famine.

UN envoy Martin Griffiths arrived in Sanaa on Wednesday to meet with Houthi leaders to discuss convening peace talks in Sweden next month. The Houthis failed to show up to peace talks in September. Kuwait has offered to provide planes for the parties to ensure the participation of both sides in Stockholm.

Griffiths faces a daunting challenge to overcome deep mistrust between all sides. A draft resolution, seen by Reuters, calls for a halt to fighting in Hodeidah, a stop to attacks on populated areas across Yemen and an end to attacks on countries in the region.

It also calls for an unhindered flow of commercial and humanitarian goods, and a large, fast injection of foreign currency into the economy through the central bank.

"We are hoping that these peace conversations in Sweden next month will provide a ceasefire, will provide confidence-building measures. That we will have more possibilities for humanitarian organisations and for the population to start to move, to start to regain a normal life," ICRC's Batallas said.