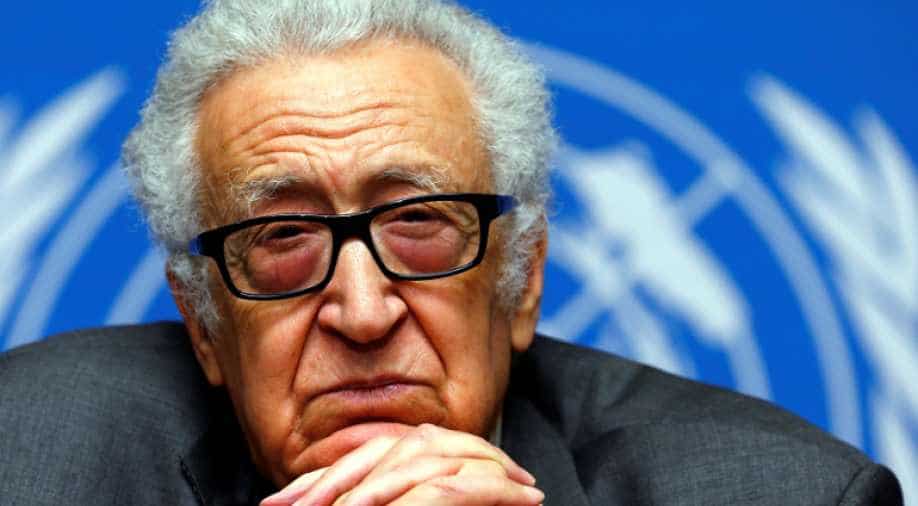 A former foreign minister, Brahimi has carried out troubleshooting missions for the United Nations across several regions and mediated on some of the Middle East`s thorniest conflicts.

Lakhdar Brahimi, the veteran diplomat who is expected to steer Algeria`s political transition after mass protests, has won respect from foreign leaders and his country`s political elite during his long career.

But his appointment may not go down well with protesters demanding rapid change. At 85, he is three years older than President Abdelaziz Bouteflika and from the same generation that has presided over Algerian politics since the 1954-62 war of independence against France.

Bouteflika yielded to the protests on Monday by postponing elections and dropping plans to stand for a fifth term. Brahimi is now likely to chair a conference planning Algeria`s future, a government source said.

A former foreign minister, Brahimi has carried out troubleshooting missions for the United Nations across several regions and mediated on some of the Middle East`s thorniest conflicts.

Though not directly or publicly involved in national politics, he is a heavyweight of Algeria`s establishment, long viewed as a possible presidential candidate. He is close to Bouteflika.

"The voice of the people has been heard," Brahimi said on state television after Bouteflika`s announcement that he would not seek a new term.

"Young people who took to the streets acted responsibly and gave a good image of the country. We must turn this crisis into a constructive process."

Bouteflika has said his own final act will be to usher in a new system that will be in "the hands of a new generation of Algerians".

The "inclusive and independent" national conference that Brahimi is expected to head is tasked with drafting a new constitution and setting a date for elections by the end of 2019.

It is likely to include prominent war veterans as well as representatives of the protest movement which has brought tens of thousands of people on to the streets since last month, political sources said.

The plan may struggle to win support, however. Large crowds turned out again in cities across Algeria on Tuesday, protesting against the extension of Bouteflika`s term and calling for faster change.

Educated in Algeria and France, Brahimi launched his career during the independence war, representing the National Liberation Front (FLN) in Southeast Asia while Bouteflika and other future leaders joined the FLN on the home front.

A career in the foreign service followed, including ambassadorial roles in the 1960s and 70s during Algeria`s post-independence diplomatic heyday, when a youthful Bouteflika was foreign minister.

Brahimi was foreign minister himself from 1991 to 1993, as Algeria slid into a civil conflict.

In an interview published in 2010, he said elections that were cancelled by the army, with the Islamic Salvation Front (FIS) poised to win, should never have been held, given the Islamists` strength.

But he said that once the first round was held in December 1991, the second round should have gone ahead too "because what followed could not have been worse".

Fighting that pitted security forces against an Islamist insurgency eventually killed as many as 200,000 people, with Bouteflika overseeing amnesties that drew the conflict towards a close after he became president in 1999.

From the 1980s, Brahimi served in multinational bodies, helping mediate an end to Lebanon`s civil war for the Arab League in 1989-91, an experience he described as formative.

He spent six months heading the UN observer mission to South Africa before Nelson Mandela`s election as president in 1994, and served twice as U.N. special envoy to Afghanistan, before and after the fall of the Taliban in 2001. In 2004, he was special envoy to Iraq.

In what was expected to be his final high-level mission, in 2012 he was named UN special envoy for Syria as the war there worsened, leading negotiations between President Bashar al-Assad`s government and rebels in Switzerland.

Brahimi quit two years later, unable to break intra-Syrian and international deadlocks. He told the UN Security Council: "I go with a heavy heart because so little was achieved."

In December 2018 Brahimi told Jeune Afrique magazine that he did not foresee a domestic crisis in Algeria.

"Recently I travelled a little in the interior of the country and I have the impression that Algeria is doing quite well," he said, citing infrastructure development in his home region south of Algiers.

He said he did not believe Bouteflika was widely contested, and that he did not have an opinion on whether the president should stand again.

"I have great confidence in him and great friendship for him," he said.