US will not push allies into 'us-or-them choice' on China, says Antony Blinken 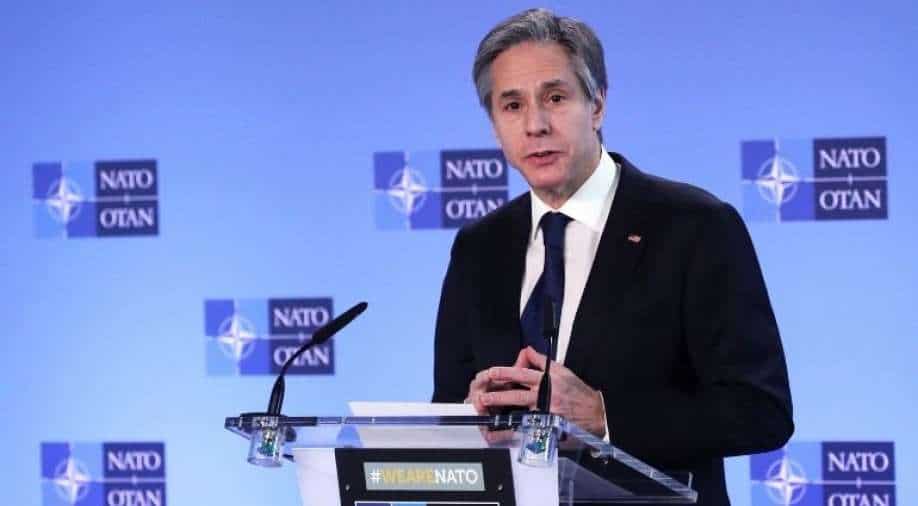 A file photo of US Secretary of State Antony Blinken  Photograph:( Reuters )

Blinken said China's military rise and Russia's attempts to destabilise the West were threats that required NATO to come together, urging Turkey to embrace the alliance

Secretary of State Antony Blinken said on Wednesday that the US will not press Washington's allies to choose between their ties with the country and its allies.

The first top US official to visit NATO since President Joe Biden took office in January, Blinken said ''the United States won't force our allies into an 'us-or-them' choice with China."

Blinken said China's military rise and Russia's attempts to destabilise the West were threats that required NATO to come together, urging Turkey to embrace the alliance.

The comments from Blinken represent a major shift in US policy from attempts by former leader Donald Trump to strong arm allies into taking a tougher line on Beijing.

President Joe Biden is keen to take a multilateral approach as he looks to enlist NATO allies and partners such as the European Union in a united front of democracies to challenge authoritarian China.

Washington and Brussels took a first step towards joint action against Beijing by unveiling synchronised sanctions on Monday over the crackdown on the Uyghurs in China.

Earlier, the United States and China levelled sharp rebukes of each others' policies in the first high-level, in-person talks of the Biden administration on Thursday, with deeply strained relations of the two global rivals on rare public display during the meeting's opening session in Alaska.

The United States is looking for China to change its behaviour if it wants to reset sour relations, but Beijing has said Washington is full of illusions if it thinks it will compromise.

Sparring in an unusually extended back-and-forth in front of cameras, US Secretary of State Antony Blinken and national security adviser Jake Sullivan opened their meeting with China's top diplomat Yang Jiechi and State Councilor Wang Yi in Anchorage, fresh off of Blinken's visits to allies Japan and South Korea.

Washington says Blinken's Asia tour before the meeting with Chinese officials, as well as US outreach to Europe, India and other partners, shows how the United States has strengthened its hand to confront China since Biden took office in January.

At talks with South Korean Foreign Minister Chung Eui-yong in Seoul, Blinken had said China was using "coercion and aggression," citing its actions towards Taiwan and Hong Kong and in the contested East and South China Seas.