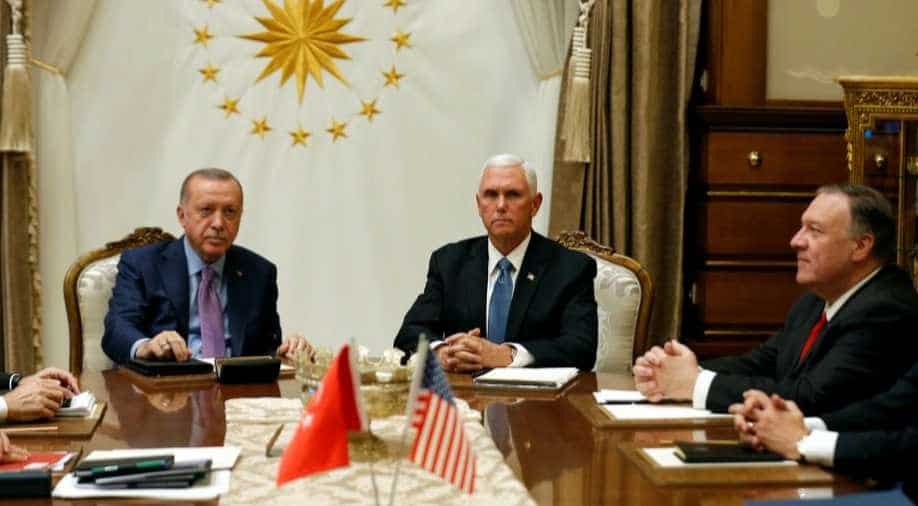 The US and Turkey on Thursday reached an agreement on imposing a five-day truce to build a safe zone in northern Syria, where the Turkish forces had been fighting against the Kurdish militia.

The US and Turkey on Thursday reached an agreement on imposing a five-day truce to build a safe zone in northern Syria, where the Turkish forces had been fighting against the Kurdish militia.

Selcuk Colakoglu, director, Turkish Center for Asia Pacific Studies, said the two countries are under pressure from the international community to reach the agreement.

"Turkey and US are allies in NATO and also have very deep cooperation in fields of security, defence and others. So they should and they must find ground for making consensus for that. Two governments are under pressure of international public to end ongoing operation," said Colakoglu.

The agreement was reached following Erdogan's meeting with US Vice President Mike Pence who announced that United States will help facilitate an "orderly withdrawal" of Kurdish-led troops from what Turkey has termed as a "safe zone" on the Syrian-Turkish border.

Analysts said the situation is not certain as Turkey is still cautious about the US promises. Erdogan's meeting with Putin on Tuesday will add murk to an already muddy situation.

"Turkey announced that Turkey will monitor weather these promises are kept or not. Why? Because they have a really bad experience in the promises made by America to Turkey. So Turkey would like to see if this would end operation or not," said Filiz Katman, assistant professor, Istanbul Aydin University.

"And this state is very much related to the meeting plan with Russian President Putin. Then it's October 22. If the promises are not kept, Turkey will continue with Russia," said Katman.