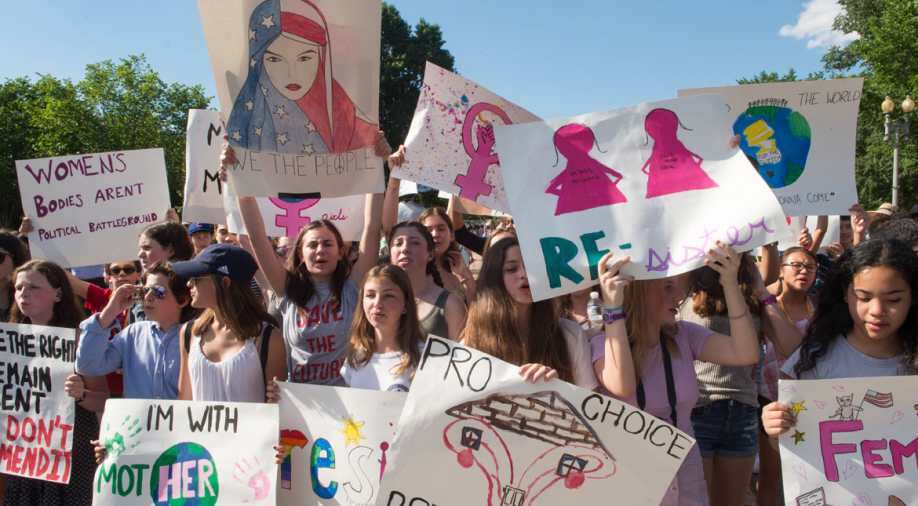 Protesters hold signs during a demonstrations against Trump outside the White House on June 2. Photograph:( AFP )

US billionaire and UN envoy for climate change Michael Bloomberg pledged $15 million to support the agreement's coordinating agency if necessary||The states of California, New York and Washington announced that they were forming an alliance committed to upholding Paris emmisions commitments

State governors, city mayors and powerful companies united Friday in defiance of President Donald Trump's pledge to take the United States out of the Paris climate accord, pledging to meet greenhouse gas emission targets regardless.

A majority of Americans in every state, or 69 percent of US voters, believe the United States should participate in the agreement, according to a recent opinion poll carried out by Yale University's program on climate change communication.

US billionaire, philanthropist and UN envoy for climate change Michael Bloomberg pledged $15 million to support the agreement's coordinating agency if necessary -- the sum it stands to lose should the United States refuse to pay its share.

"Americans will honor and fulfill the Paris agreement by leading from the bottom up," he said, flying to the French capital to meet President Emmanuel Macron in an expression of solidarity.

"Mayors, governors and business leaders from both political parties are signing onto a statement of support that we will submit to the UN -- and together, we will reach the emission reduction goals the US made in Paris in 2015," said Bloomberg.

The United States -- the world's second largest greenhouse gas emitter after China -- pledged in the Paris climate deal to reduce emissions that contribute to global warming by 26 percent in a 20-year period by 2025.

The Democratic-led states of California, New York and Washington announced separately that they were forming a United States Climate Alliance committed to upholding Paris emissions commitments and urged others to climb on board.

Charlie Baker and Phil Scott, the Republican governors of Massachusetts and Vermont respectively, announced that their liberal northeastern states were joining the Climate Alliance and committed to the goals of the Paris agreement, as did their Democratic counterparts in Connecticut and Rhode Island.

Around 150 mayors, who say they represent 47 million Americans, have also committed to uphold the Paris commitments, intensify efforts to meet climate goals and increase investments in renewable energy and energy efficiency.

Several major US corporations, captains of industry and business groups urged Trump to honor the endangered agreement, with oil super majors ExxonMobil and Chevron among those reiterating their support for the accords.

New York's Bill de Blasio, mayor of America's most populous city, told WNYC radio that he wanted to "surpass" his commitment to reduce emissions 80 percent by 2050.

While UN officials stress that it could take several years before there is a proper understanding of the implications of a US withdrawal, they also say the deal was structured to require action at multiple levels of government, not just federal.

Robert Orr, one of the architects of the Paris accord and a former special advisor to the UN secretary general on climate change, told AFP that the United States had already been on track to achieve about half its Paris reductions commitment.

"The president may have unwittingly added dynamism to the same actors that have always been the ones that are delivering the reductions to actually do more on their own," he told AFP.

"If this coalition broadens and deepens at the pace that it appears to be, I think the Trump effect could be more than mitigated," added Orr, now dean of the School of Public Policy at the University of Maryland.

California, New York and Washington, three of the states in the Climate Alliance, represent more than one-fifth of US gross domestic product and account for at least 10 percent of greenhouse gas emissions in the United States, their governors said.

The governor of Hawaii has also pledged to continue concrete steps to implement the Paris accord, while governors of Colorado, Minnesota, Oregon and Virginia committed to clean air and clean energy.

The earliest possible date for America's official withdrawal from the Paris agreement is November 4, 2020 -- the day after the next US presidential election -- although Trump's current term in office is not due to end until January 20, 2021.