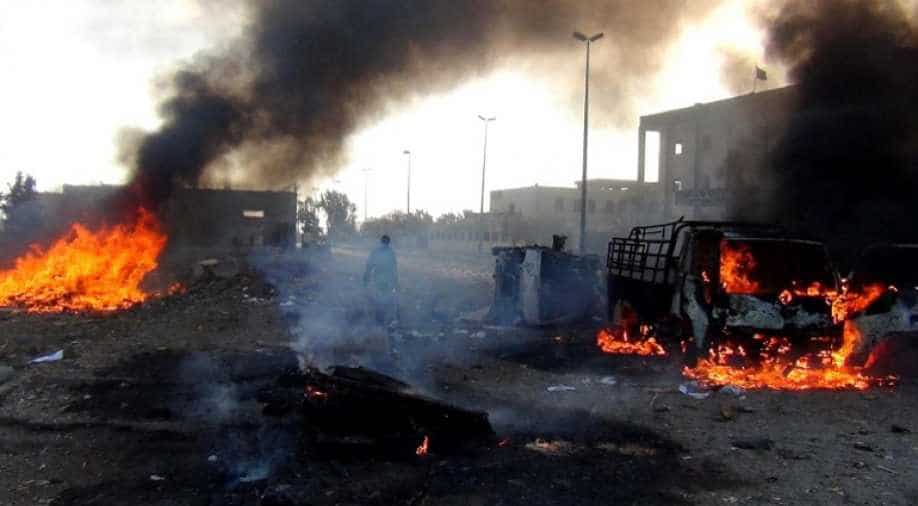 IS-controlled Al-Heisha has been the target in a new US-backed Syrian offensive?to recapture Raqqa. In photo: A man walks amidst smoke following a reportedly air strike by Syrian government forces on November 25, 2014. Photograph:( AFP )

At least 20 civilians were killed in a US-led coalition air strike in a village near the Islamic State's Syrian stronghold of Raqqa, Britain-based Syrian Observatory for Human Rights said on Wednesday.

The monitor said dozens of people were also wounded in the strikes Tuesday night on the village of Al-Heisha, 40 kilometres (25 miles) north of Raqqa, AFP said. Rahman said that all casualties were civilians.

The coalition confirmed it conducted the air strikes in the area but said it was investigating if civilians were killed.

"After an initial assessment of strike logs against the date and location of the alleged civilian casualties, the coalition confirms it did conduct strikes in the area described in the allegation," Colonel John Dorrian, a spokesman for the coalition, told AFP. "However, more specific information is needed to conclusively determine responsibility."

Jihan Sheikh, a spokeswoman for the Kurdish-Arab alliance, dismissed the reports saying, "There is no such thing, and any such claims are IS news".

The media account of Syrian Democratic Forces (SDF) reported the death of at least 6 Islamic State (IS) fighters in the coalition air strike on the village. They accused the jihadist group of using the civilians trying to leave Al-Heisha as "humans shields". Syria announced a bid to recapture Islamic State's 'capital' Raqqa on Sunday. IS-controlled Al-Heisha has been the target of a new US-backed Syrian offensive to recapture Raqqa.

Civilians fleeing Al-Heisha told AFP on Tuesday that IS fighters had brought heavy weaponry into the village when the SDF operation began.

"Daesh (IS) fighters brought heavy weapons to our village and stayed among us so that if there were strikes they would hit us," 45-year-old Saada al-Aboud said.

"They wouldn't let us leave. We had to escape by running out into the fields, with our children and old people. What else could we do? We left everything behind."

The Observatory said the latest deaths brought the number of civilians killed since the US-led air strikes in Syria began in September 2014 to 680, including 169 children, AFP said.