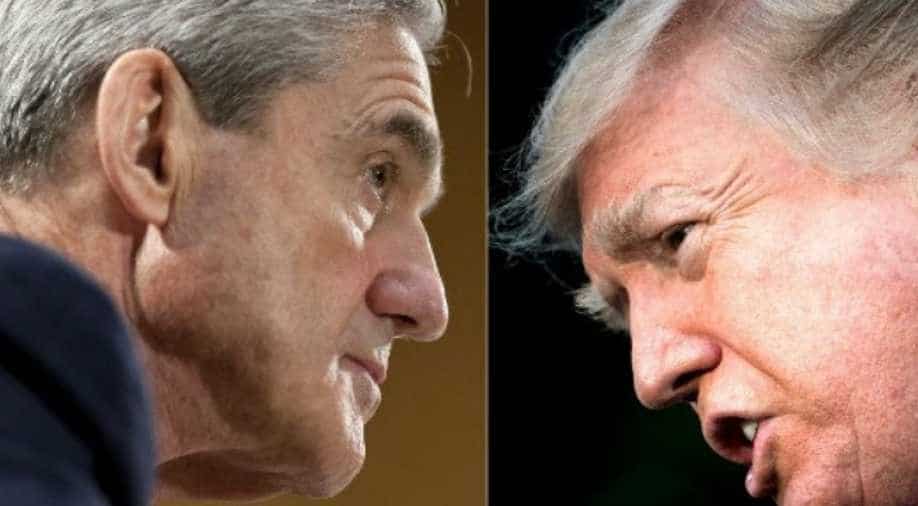 Trump has yet to receive or be briefed on the findings of the Robert Mueller probe into whether the Trump campaign colluded with Russia, a spokesman said from the Florida resort where Trump was spending the weekend.

Republican and Democratic lawmakers clashed sharply on Sunday over the meaning of the newly completed report on Russian meddling, even as they waited to be briefed on its scope and contents.

President Donald Trump has yet to receive or be briefed on the findings of the Robert Mueller probe into whether the Trump campaign colluded with Russia, a spokesman said from the Florida resort where Trump was spending the weekend.

The president was continuing a rare silence on Twitter about the matter.

Sunday marked his third day with no public comment on the investigation that he has blasted dozens of times as a "witch hunt."

Attorney General William Barr, who received the secret report on Friday, is expected to brief key members of Congress sometime Sunday, though no announcement has been made.

Trump aides and supporters have seized on word from the Justice Department that the report will recommend no indictments -- news that brought relief to some in Trump's closest circle.

Republicans suggested on Sunday that it was time for Democratic lawmakers to drop their own investigations and move on.

Doug Collins, the ranking Republican on the House Judiciary Committee, repeated Trump's frequent insistence that "there was no collusion." He told "Fox News Sunday" that once the report comes out, "We can hopefully begin to move on."

But Adam Schiff, the Democrat who chairs the House Intelligence Committee, said on ABC that even if Mueller is recommending no new indictments, "that hardly looks like vindication to me."

"We know there was collusion," said another key Democrat, Jerry Nadler, who chairs the House Judiciary Committee, speaking on CNN. "Why there's been no indictments, we don't know."

The two were part of a chorus of Democratic voices demanding the release of the full Mueller report, not just a summary from Barr, a Trump appointee.

Schiff said Congress would first simply request the full release, but was prepared to use its subpoena powers or "prosecute in court, as necessary, to get the information."

He added, "We'll win that litigation."

Many Democrats hoped the report would provide evidence to support a presidential impeachment and have pressed hard for its full public release.

But Schiff and Nadler insisted on Sunday that they needed to see the full report before considering impeachment.

Nadler noted that Mueller's inquiry was "limited in scope and limited to crimes. What Congress has to do is look at a broader picture."

A vow of transparency

While the department has said that a sitting president cannot be indicted, the Mueller report could outline criminal behaviour by Trump that might be the basis for an impeachment effort.

As Washington and the rest of the country nervously awaited word of exactly what Mueller's team had turned up, Barr vowed to congressional leaders that he was "committed to as much transparency as possible."

"Absolutely nothing in the law or the regulations prevent the report from becoming public," he said in a Washington Post opinion piece.

Five of the six have pleaded guilty to the charges against them.

Court filings in those cases painted a broad picture of a cohesive Russian effort via hacking and social media manipulation to swing the election in Trump's favor against Democrat Hillary Clinton.

Mueller, a 74-year-old veteran criminal prosecutor and former FBI chief, investigated not only possible collusion but also whether actions by Trump, including the May 2017 firing of FBI director James Comey, amounted to criminal obstruction of justice.

The investigation has revealed scores of contacts between the campaign and Russians, with members of the team readily talking to the Russians about obtaining dirt on Clinton.

Trump's son Donald Jr. and his son-in-law Jared Kushner had appeared to be possibly vulnerable, particularly because of a Trump Tower meeting with a Russian lawyer.